On January 29, Vancouver will be celebrating its 44th annual Chinese New Year parade, featuring over a dozen floats, traditional lion dance troupes with over 3,000 participants in their colorful traditional costumes. The annual parade which draws over 100,000 spectators globally each year, offers many activities including a cultural fair, Chinese New Year banquet dinner and performances throughout the first two-days of the new year.

If you want to stay close to the action, check out the Opus Hotel or Hotel Blu. These highly-rated accommodations are within walking distance to the starting line of the parade (Millennium Gate), city centre and the waterfront.

Los Angeles is probably the city with the most activities planned for Chinese New Year outside of Asia. From multiple parades across the different valleys of L.A. to a Firecracker Run, it is definitely one of the top destinations to visit during this festive season. A not to miss event is the century-old Golden Dragon Parade where you will see the Hollywood and Asian culture come together. Some prominent personalities who marshalled the Golden Dragon Parade include actor and martial artist, Bruce Lee, Star Trek actor, Garrett Wang and Playboy founder, Hugh Hefner.

Tip: you probably donâ€™t want to stay anywhere too far from the parade as traffic would be a pain to get around. Pick an accommodation within the heart of downtown L.A. such as the Resort Style Apartment and youâ€™re half a mile from the parade.

If youâ€™re planning to fully embrace the culture, visit Penang Island. Make sure you stay until the last day of celebrations (February 11) to witness a unique Malaysian Chinese tradition â€“ Chap Goh Meh. This unusual custom involves young maidens throwing mandarin oranges into the sea while the young men wait in boats to scoop them up! Marking the last night of Chinese New Year, this practice has been known as a night of courtship where many young ladies would make their way to the temples, dressed in their best, hoping to find prospective suitors. When youâ€™re there, do visit the majestic Kek Lok Si temple, one of Southeast Asiaâ€™s largest Buddhist temple for an amazing photo opportunity or get your fortunes read by one of the resident monks.

Complete your stay in Penang at one of the many historical shopfronts turned guesthouses such as Ren I Tang which was previously South East Asiaâ€™s oldest Chinese Medical Hall Wholesaler established in 1885.

In Singapore (and most parts of Malaysia), another unique Chinese New Year tradition is the tossing of raw fish or better known as â€˜Yushengâ€™. Customarily, the tossing of â€˜yushengâ€™ happens on the seventh day of Chinese New Year and involves all the people at the table tossing the dish and uttering auspicious phrases, in hope for a better year. Just head to any Chinese restaurants in Singapore during this season and try it out yourself for good fortune and health in 2017!

If youâ€™re looking for another interesting hotel experience to top off the trip, try the Cube â€“ Boutique Capsule Hotel (not for the claustrophobic!) right along Chinatown. The hotel is designed with the fuss-free traveller in mind, featuring a collection of comfortable capsules with blackout curtain hidden from the outside world. 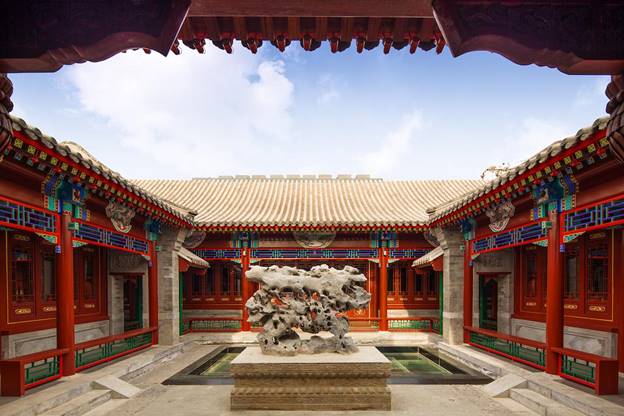 Beijing is known for its temple fair or â€˜miao huiâ€™ since the 1600s. Today, some of these fairs are held as regularly as every fortnight. During the Chinese New Year season, these temples are decked out in beautiful fans and lanterns and the temple fair is held every night throughout the festive season. One of the most prominent and extravagant temple fairs in Beijing is the one in Ditan Park where tourists can witness spiritual rituals, watch Chinese operas, and taste Chinese traditional snacks. Expect a huge crowd at the fair, though!

Less than a mile from the Temple of Earth is the beautiful Beijing RuYuan Courtyard where visitors can stay at the ancient palace of the Qing Dynasty.