As Seen on Screen: Hotels from Hollywood films

Casting call for film lovers, devoted fans, and anybody whoâ€™s ever wanted to be a star for a day! Weâ€™ve created a highlights reel of Booking.comâ€™s most famous faÃ§ades, so you can stay in the best hotels from the big screen.

According to Booking.comâ€™s travel predictions for the new year, movies will play a huge role in what inspires travelerâ€™s decisions on vacation. In 2018, reading blogs or watching YouTuber recommendations will spark ideas for four in ten (39%) travelers and on-screen locations from television, film or music videos will win over 36% of travelers. So, these five properties are just the thing for some cinematic escapism â€“ costume optional, of course!

Director, Sofia Coppola, described Lost in Translation as â€˜a valentine to Tokyoâ€™ â€“ and with its luxury feel and sprawling city views, theÂ Park HyattÂ provides the ideal backdrop for her love affair. At the top of the 52-storey skyscraper is the â€˜New York Barâ€™, where Bill Murray and Scarlett Johansson have their late-night insomnia-induced rendezvous.

The spacious rooms here come with complimentary robes and slippers, so you can even recreate the famous bed shot, with Tokyo twinkling behind you. 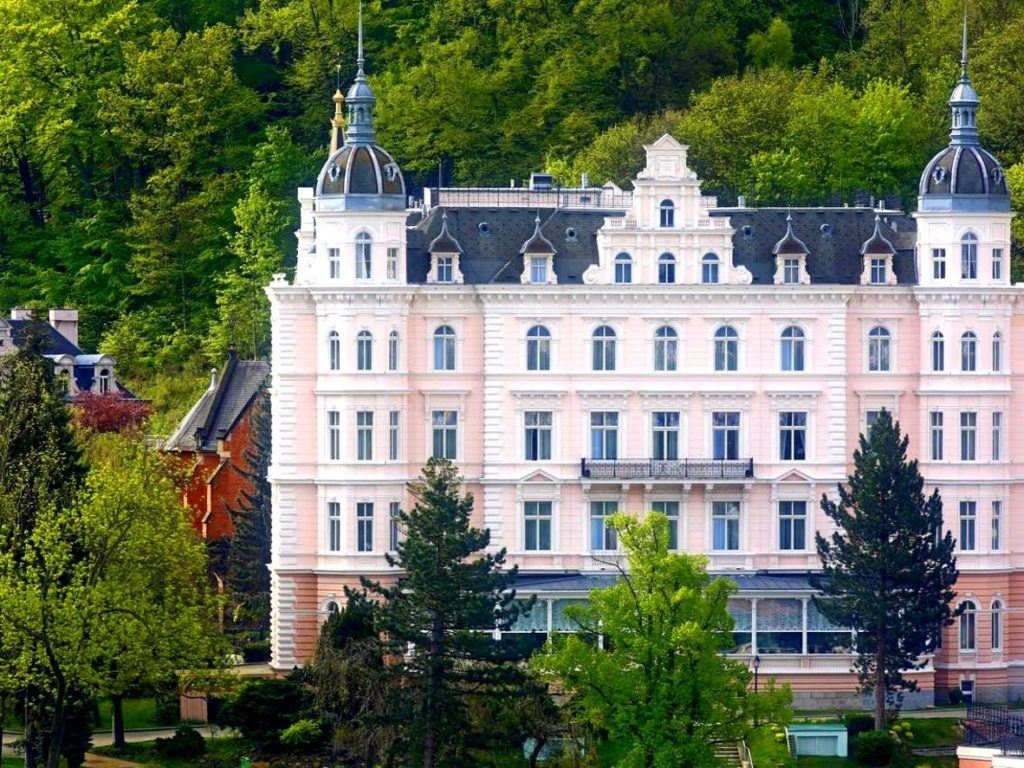 Wes Anderson is famed for his pastel-hued, symmetrical shots, and the sugary sweet faÃ§ade of The Grand Budapest Hotel is a classic example.

The finished product is straight from Andersonâ€™s imagination, but fans can still pay homage at theÂ Grandhotel PuppÂ â€“ which inspired the design. (The candyfloss pink comes from theÂ Hotel Palace Bristol, also in Karlovy Vary!)

While the perfumed Monsieur Gustave H. may never have graced the concierge desk here, Grandhotel Pupp has had famous visitors in the form of composers Bach and Wagner.

From the outside,Â Timberline LodgeÂ is immediately identifiable as The Shiningâ€™s eerie Overlook Hotel. But put aside all thoughts of spooky twins, hatchet-wielding antagonists and waves of blood rolling down the hallways â€“ most of the interior shots were actually filmed in a studio.

The real lodge is a cosy ski-to- door accommodation, thatâ€™s a far cry from the bleak setting of the cult horror classic. Deep in the Mount Hood National Forest, Timberline has three restaurants, a heated outdoor pool, and an indulgent sauna.

Rooms here are huge, plush pads, with the larger suites more than slightly resembling the penthouse rented out by Richard Gereâ€™s character, Edward. Gere and Roberts are spotted having drinks here sometimes, which makes the perfect excuse to grab a â€˜Pretty Womanâ€™ cocktail in the hotelâ€™s â€˜The Blvdâ€™ bar.

It doesnâ€™t get much more â€˜Vegasâ€™ than the ostentatiousÂ Caesars PalaceÂ â€“ the playground for the debauched stag-party antics of The Hangover.

The huge hotel manages to encompass a vast casino, shopping centre, sports arena, nightclub, several restaurants and no fewer than seven swimming pools. And if that wasnâ€™t enough, itâ€™s also right on the Las Vegas strip. Its range of opulent suites are comfortable in the extreme, with luxurious, hopefully tiger-free, en suite bathrooms.