What’s a bucket list? It’s a list of goals and experiences you want to accomplish during your lifetimeÂ Some of my bucket list items are see the Northern Light,Â run a marathon,Â fly a hot air ballon andÂ scuba dive on the Great Barrier Reef. When Ford Canada invited me to meet global adventurer and travel writer, Robin Esrock for a Whistler escape, without any hesitation I said YES!Â Robin Esrock is a best-selling author of The Great Canadian Bucket List, co-host ofÂ World TravelsÂ and has traveled toÂ more than 100 countries.

On a cool Thursday morning, I’ve meet up with Robin and team of bloggers to pick up our vehiclesÂ – Ford Escape, Ford Mustang and Ford Fusion. Lee Anne and I chose the 2015 Ford Escape SE with 1.6L EcoBoost Engine. It’s the perfect road trip SUV with plentyÂ of room for 5 and lots of storage space.

Set inÂ our destination address into theÂ Nav SystemÂ and on our way to Whistler!

After a 2 hour scenic drive, we arrived at the top of the Whistler Sliding Centre.

During lunch, Robin Esrock sharedÂ his bucket listÂ journey. For the past decadeÂ traveling around the world,Â Robin has wash an elephant, host a National Geographic TV show, sandboard on a volcano, went dogsledding, bungee jump, heli-yoga in the Rockies, went paragliding and skydiving.

After hearing all the greatÂ travel stories, we were ready to check off bobsledding on our bucket list.Â Built for the 2010 Vancouver Winter Olympics andÂ Paralympic Winter Games, the Whistler Sliding Centre is home of world’s fastest and steepest track.

After a brief safety orientation, we were split into 2 teams based on weight. My team was Robin, Vanessa, Ashley and our pilot, Caine. The other team was Dennis, Lee-Anne, Stephanie and Will and their pilot, Crowbar. It was Bucket List Bob vs Squishy Face Bloggers.

We strap on our helmets and brace into ourÂ bobsleigh on wheels.

As anÂ adrenaline junkie, I love all things speed. I was super excited to ride the world’s fastest track. The Roller Thunder track goes throughÂ 10 corners including the famous Thunderbird Corner, where you will reach your top speed and maximum G forces.Â You get toÂ experience what it really feels like to be an Olympic athlete andÂ sliding downÂ on the legendary track.

Unlike a roller coaster, your head gets knocked around through the turns. It’s a good thing we are wearing helmets. The ride was fun and intense as we reached a top speed of 91 km/hr and experience 2 G forces. That’s two times your body weight is pushing down on you. We crossÂ the 1,450 metre track in 55 seconds. What a rush! In the winter, the bobsleigh on ice can reach speed up to 125 km/hr and 4 G forces. I can’t wait to go back and try it on ice. 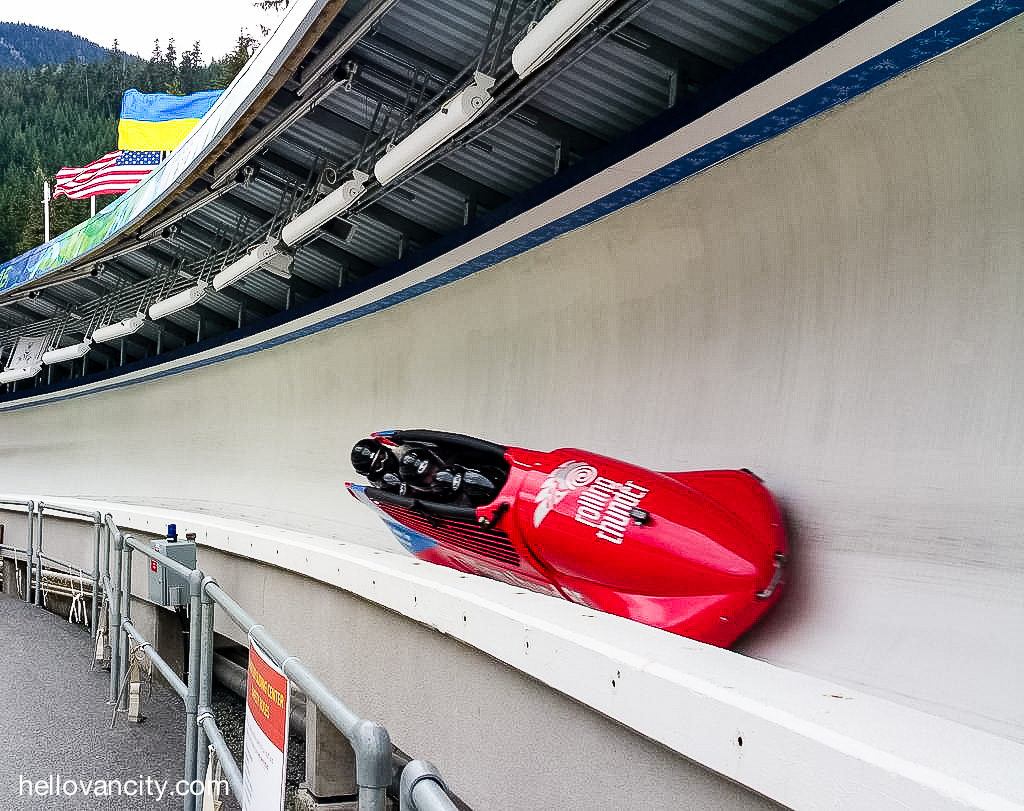 As an avid traveler, it was awesome to spend a day with Robin and go bobsledding. Thank you Ford Canada for crossing it off my bucket list. Looking forward to the next Ford adventure.