The highly anticipated fifth season of â€˜Orange is the New Blackâ€™ is now streaming on Netflix. To help channel your favourite â€˜Orange is the New Blackâ€™ inmate, Booking.com, the global leader in connecting travellers with the widest choice of incredible places to stay, delved into its over 1 million properties to find the best former prisons turned into intriguing hotels. Luckily, you donâ€™t have be a convicted criminal to spend time in any of these former prisons (and the doors lock from the inside only), so you actually wonâ€™t mind being â€˜locked upâ€™ for the night.

Het Arresthuis, which is Dutch for â€˜house arrestâ€™, is a former prison and detention centre in the centre of Roermond. Historically, Het Arresthuis was used as a detention house for small-time criminals awaiting trial and then as a state prison. Today it offers guests luxurious rooms with complementary Wi-Fi, a flat screen TV and international gourmet cuisine at the hotelâ€™s restaurant â€“ a far cry from the bare necessities offered at Orange is the New Blackâ€™s Litchfield Penitentiary.

Housed in a converted county prison and pre-trial detention centre from 1837, this atmospheric hotel is on Katajanokka Island in central Helsinki. Inside the red brick wall, you will find a unique world of contrasts â€“ with serene comfort, stylish design and a hint of Nordic luxury. Restaurant Linnankellari operates in the basement of this old county jail and offers Finno-Scandinavian local and organic food prepared of the finest ingredients. 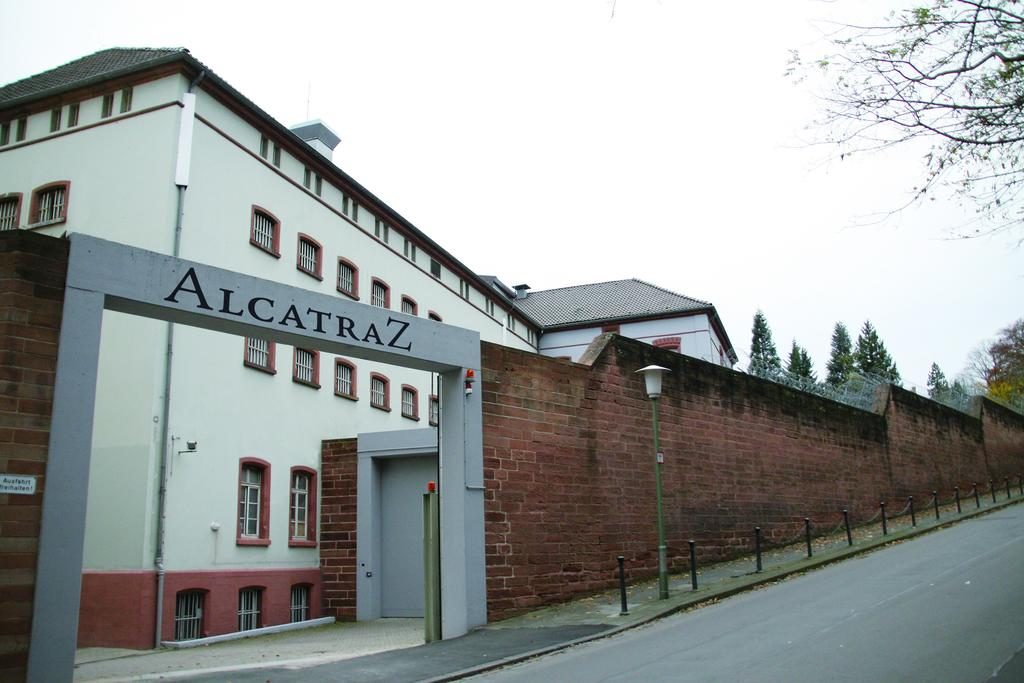 For a more authentic prison experience, check yourself into the Alcatraz Hotel am Japanischen Garten, Germanyâ€™s first prison-hotel. Dating back to 1867 and located near the Japanese Garden in the centre of Kaiserslautern, this prison-turned-hotel offers both cell-style as well as conventional rooms. In the cell-style rooms, guests can get a small taste of prison life via barred windows, original prison beds (made by former prison inmates), and even a washbasin and toilet in the room. The hotelâ€™s Hinter Gittern Bar, German for â€˜behind barsâ€™, is ideal for rounding off a busy day with a few drinks before escaping to your quiet cell or room for the night.Â

Situated in a three-storey, neoclassical prison building with a landscaped courtyard, Four Seasons Sultanahmet is in the centre of Istanbulâ€™s Old Town. Formally known as the Sultanahmet Prison, or â€˜Sultanahmet Cezaeviâ€™ in Turkish, construction began in 1918 and housed male, female and youth prisoners as well as the occasional artist and political figures. Today it offers luxury accommodation with original works by Turkish artisans such as handwoven Turkish rugs and marble bathrooms.

LÃ¥ngholmen Hotell is housed in a 19th century prison building on LÃ¥ngholmen Island in Stockholm. The modern rooms at Hotell LÃ¥ngholmen retain many authentic prison features from the days when the building was knows as the Crown Remand Prison (KrononnhÃ¤ktet in Swedish). Itâ€™s also home to Stockholm’s most captivating prison museum, From Crime to Chains, which is open daily and gives visitors insights into Langholmenâ€™s exciting past. Guided tours and other activities are also available.

Located just a short drive from the Blue Lake and main street of Mount Gambier, this unique gaol (Old English for â€˜prisonâ€™) offers a range of experience accommodation options. Opened as a prison in 1866, guests staying at the gaol today have access to many of the historic sites of the prison; such as the old lounge, the library and the prison chapel, which have all been converted into modern common areas equipped with internet, TVs and comfortable furniture.

Whatâ€™s known today as the lavish Liberty Hotel was originally built in 1851 as The Charles Street Jail. In its years operating as a prison, it held famous inmates including James Michael Curley, Malcom X, Sacco and Vanzetti, among others. Today The Liberty Hotel elegantly combines historic style and architecture with today’s modern conveniences, including Wi-Fi access and state-of-the-art fitness facilities, while featuring playful nods to its infamous past.