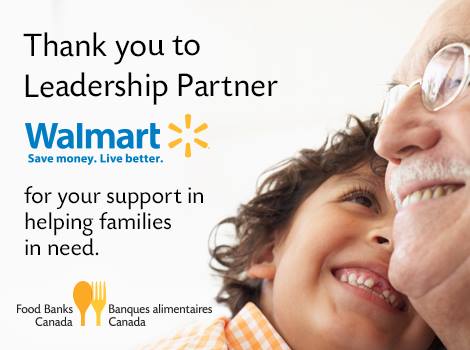 Walmart Canada announced aÂ 1.2 million dollarÂ contribution to Breakfast Club of CanadaÂ and Food Banks Canada to support Canadian families in need. According to theÂ 2015 Report Card on Child and Family Poverty inÂ Canada, one in ten Canadians and one in five children don’t know where their next meal is coming from. The funds donated today includeÂ $600,000Â to each organization â€“ funds that will increase access to healthy food for those who need it most.

The company is building upon longstanding relationships with both organizations to address the serious issue of food insecurity in communities across the country. According to the same report, four million Canadians â€“ including 1.34 million children â€“ did not have adequate access to quality, nutritious food in 2015.

The donation includesÂ $600,000Â to support the Food Banks Canada food banking network and the National Food Sharing System, helping local food banks increase the amount of nutritious food options available to Canadian families.Â $600,000Â will support Breakfast Club ofÂ CanadaÂ programs in schools across the country. According to teachers, the healthy meals and socialization provided through these programs result in improved attendance and punctuality, increased concentration, decreased bullying, and a renewed interest in curriculum subjects.

“We believe that all Canadian families deserve access to healthy food,” saidÂ Bob Hakeem, chief administrative officer, Walmart Canada. “Breakfast Club ofÂ CanadaÂ and Food Banks Canada are a vital part of Canadian communities and we are pleased and honoured to support these two commendable organizations so they can continue to help ensure Canadian families have enough food and Canadian children have a healthy start to their day.”

“The funds raised from today’s announcement will directly impact the lives of Canadian children,” saidÂ Daniel Germain, president and founder, Breakfast Club ofÂ Canada. “A healthy breakfast to start a child’s day is crucial in ensuring they are able to thrive, learn and flourish. Through these programs we are nourishing the potential of children.”

“According to our most recent HungerCount report, each month, Food Banks Canada, through its network of over 530 food banks, assists more than 850,000 people across the country,” saidÂ Katharine Schmidt, executive director, Food Banks Canada. “This donation enables us to acquire and share quality nutritious foods so families living with hunger can put food on the table,” she said.