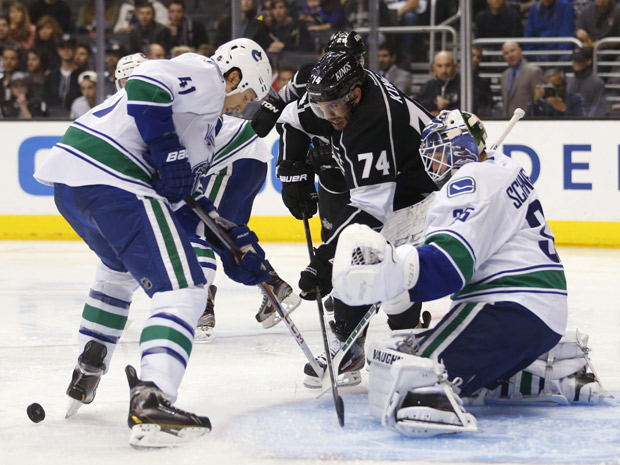 Schneider made 20 saves en route to his sixth NHL shutout, Mason Raymond scored in the first period, and the Canucks beat the Los Angeles Kings 1-0 on Saturday for their third straight victory.

â€œIt was a close game, and not a lot of offence exchanged both ways, but weâ€™ll take it any way we can get it,â€ Raymond said. â€œWe didnâ€™t have a lot of shots, but I thought we played well defensively for the most part.â€

The Kings, coming off a 2-0 home loss to Dallas on Thursday in which they had 40 shots, were blanked for the third time this season. It is the first time they have been shut out in consecutive games since Feb. 16-18, 2012, when they sustained a pair of 1-0 home losses.

â€œThatâ€™s a team that plays with a lot of confidence,â€ Schneider said. â€œAfter what they accomplished last year, Iâ€™m sure they feel like theyâ€™re in every single game â€” and they have the talent to do so. They kept coming at us and didnâ€™t stray away from their game plan.

â€œThey got pucks deep, crashed the net and tried to get shots through. But we were just very good defensively.â€

Before these two blankings, the Kings were averaging four goals a game at home.

â€œWeâ€™re not making it hard enough on the opposing teamâ€™s goaltenders,â€ captain Dustin Brown said. â€œWeâ€™ve gone through spurts this year where weâ€™ve scored a lot of goals, and it was just a result of getting the puck to the net with bodies at the same time. The power play has been a big source of our offence, and we had only one shot [on two opportunities].â€

Schneider has played the last three games for the Canucks, facing 88 shots and allowing only three goals. His other shutout this season was on Jan. 26, when he made 30 saves in a 5-0 victory at Anaheim.

â€œI feel like I should be and where I can be,â€ Schneider said. â€œItâ€™s nice to have consecutive efforts in a row like that. When you have a good one and then a bad one, itâ€™s a little frustrating.

â€œYou canâ€™t sit on that and pat yourself on the back. You have to keep doing it, and thatâ€™s the challenge of playing a lot of games.â€

The Canucks, who maintained their share of the Northwest Division lead with Minnesota, scored the only goal at 11:06 of the first period.

Jordan Schroeder took control of the puck in the Canucksâ€™ zone and made a two-line pass to Raymond, who got a step on rookie defenceman Jake Muzzin and slid his eighth goal between Jonathan Quickâ€™s pads.

â€œI think Schroeder is maturing more all the time and he has great vision,â€ Raymond said. â€œHis ability to find those little holes to pass the puck is remarkable.

â€œThat was the difference in the game today, because it enabled me to get a breakaway.â€

About six minutes into the second period, Canucks captain Henrik Sedin was levelled by Drew Doughty along the boards in the neutral zone, and Kings forward Jordan Nolan kept digging for the puck while it was pinned under Sedin.

A scrum broke out and Kyle Clifford ended up with a roughing penalty. The Kings had a short-handed scoring bid, but Schneider slid across the crease to rob Trevor Lewis after a setup by Mike Richards.

â€œAs soon as he went to his backhand, you could see that he was thinking pass,â€ Schneider said. â€œI sort of sensed the other guy coming on the backdoor, and I got a good push over. I felt it hit me, but I didnâ€™t really know where it went. I just tried to get across and get as big as I could.â€

Quick (10-10-2) made a similarly spectacular save on Vancouverâ€™s Keith Ballard about two minutes before the second intermission, sticking out his left leg to deny his one-timer from in front. Last yearâ€™s Conn Smythe Trophy winner as playoffs MVP faced only 13 shots.

â€œI wouldnâ€™t say we played bad. We just didnâ€™t find a way to win the game,â€ Kings centre Jarret Stoll said. â€œEvery teamâ€™s got good goaltending. This leagueâ€™s all about that and low-scoring games.â€

The Canucks, who lost to the Kings in the opening round of last yearâ€™s playoffs, won two of the three meetings this season and lost the other in a shootout.

â€œWeâ€™ve taken five of six points against them, which is great,â€ Schneider said. â€œWeâ€™ll enjoy it now, but right now weâ€™re more focused on finishing off this road trip by getting a win [Sunday at Colorado].â€