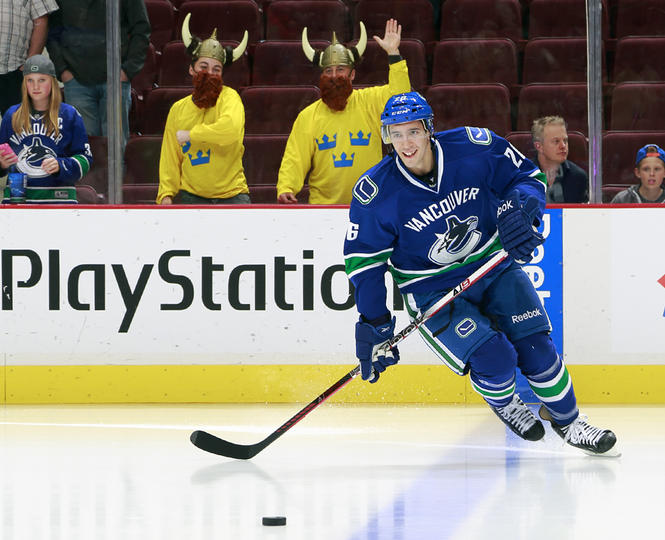 Daniel Sedin had a goal and an assist Monday as the Vancouver Canucks clinched their fifth straight Northwest Division title with a 3-1 victory over the Chicago Blackhawks.

The win was Vancouver’s eighth straight at Rogers Arena and guaranteed the Canucks (26-13-7) home-ice advantage in at least the first round of the Stanley Cup playoffs.

The NHL-leading Blackhawks (34-6-5) made clinching first place overall a bit more difficult for themselves as they suffered their second straight loss.

Jannik Hansen and Zack Kassian also scored for the Canucks, who have been able to distance themselves from the slumping Minnesota Wild in the past few weeks. Henrik Sedin added two assists and Cory Schneider made 24 saves to get the win.

Daniel Carcillo replied for Chicago, which trailed 1-0 after the first period and 3-0 after the second. Cory Crawford made 29 saves in taking the loss.

Canucks winger Chris Higgins returned to the lineup after missing six games with a knee injury, and did not take long to make his presence felt.

Crawford stopped Higgins early in the first, getting his blocker on the puck as Higgins tried to finish a perfectly executed three-way passing play with Derek Roy and Ryan Kesler.

Shortly after the eight-minute mark, Crawford snared a hard Roy shot with his catching glove.

Hansen opened the scoring on a power play at 14:28 when Jason Garrison’s slapshot went in off his skate. The puck also hit Chicago defenceman Johnny Oduya’s stick on the way to the net.

Kassian gave the Canucks a 2-0 lead at 11:37 of the second period, burying Daniel Sedin’s pass from behind the net.

Daniel Sedin put the Canucks ahead 3-0 in the final minute of the period after taking a long pass off the boards to score on a breakaway.

Schneider kept his shutout bid alive in the third by stopping Chicago rookie Brandon Saad on a short-handed breakaway, but the Canucks goaltender lost it at 11:50 of third on a fluke play.

Canucks winger Tom Sestito tried to rim the puck around the end boards, but it hit referee Tom Kowal’s skate and caromed right to Carcillo in front of the net, who fired a backhand for his second goal of the season.

Blackhawks coach Joel Quenneville pulled Crawford for an extra attacker twice in the last two minutes, but the visitors could not get any closer.

The Canucks play their final home game Thursday against the Anaheim Ducks before closing out the regular season in Edmonton on Saturday.

The Blackhawks have three more games to secure top spot overall — Wednesday in Edmonton, Saturday at home against Calgary and Sunday in St. Louis.