Mason Raymond and Alexandre Burrows scored in the second period and the Vancouver Canucks moved into sole possession of first place in the Northwest Division with a 3-2 victory over the Colorado Avalanche on Sunday night.

Jason Garrison added a goal for the Canucks, winners of four straight. Vancouver moved ahead of idle Minnesota by two points for the conference lead.

Cory Schneider made 26 saves in his fourth consecutive start. He is 5-0-1 with two shutouts against the Avalanche.
Jamie McGinn and PA Parenteau scored for free-falling Colorado, which has dropped six of seven.

Jean-Sebastian Giguere made his first start since March 5 in Detroit and allowed three goals on 30 shots. Giguere is 9-11-4 against Vancouver. 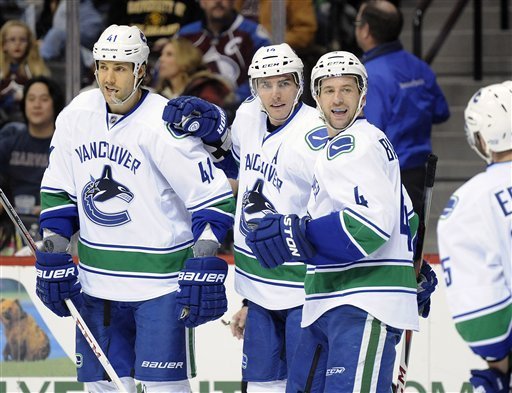