A series of bronze statues by artist Douglas Coupland have been unveiled in Vancouver as a memorial to Canadian icon Terry Fox and his Marathon of Hope.

The memorial sits at the base of BC Place stadium, featuring four increasingly larger statues depicting Mr. Fox’s instantly recognizable run on his artificial leg.

The statues show Mr. Fox running in the direction of Stanley Park, which would have been his final destination if his cross-country journey wasn’t cut short by cancer. 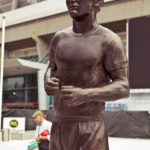 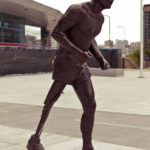