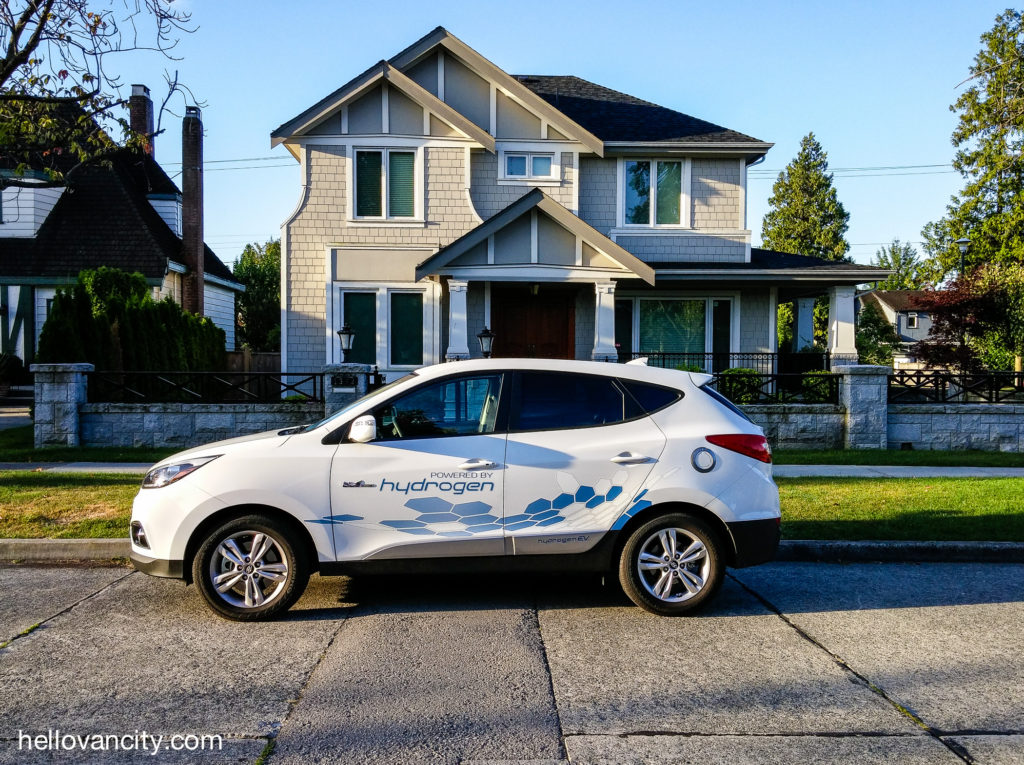 At the moment, there are more than a dozen alternative power vehicles in development or in production from hybrid electric toÂ ethanol. However, each technology has its limitation. Hybrid electric combines traditional combustion engine with an electric motor. It still use gasoline and not 100% eco-friendly.Â Another popular option is plug-in electric vehicle where you can charge it into the wall outlet. In Vancouver, you will find plenty ofÂ electric charging stations in community centres, shopping malls and office buildings. The downside to plug-in electric is limited range and take over 4 hours for a full charge.

Fuel cell is theÂ holy grail that promises zero emissions of plug-in electric with the range and refuellingÂ convenience of a traditional gasoline car.Â Hydrogen fuel cell is able to produce electricity without producing emissions other than water. Plus, it only takes less than 5 minutes toÂ fill up and drive up to 400 km in one tank.

My test vehicleÂ was equipped with all modern bell and whistles of a luxury SUV.

Accustom to driving a gas power sedan, it was nice surprise how quite and smoothÂ the drive is. There’s noÂ sound coming from drivetrain and fuel cell. The Tucson is power by 134 hp, 100 kW AC motor with 221 pound-feet of torque. It can accelerate from 0 to 100 kmh in 12.5 seconds with the max speed of 160 kmh.Â It’s plentyÂ of power for urban driving, taking the kids to school, hauling cargos andÂ camping equipments.

The Tucson cabin providedÂ ample space for a family of 5 with roomy head and leg room. The front row is extremely comfortable with 8 way power adjustable and heated seats. The second row offer a 60/40 split fold and can be adjusted to lean back.Â At highway speed, there is essentially zero engine & road noise in the cabin.

With the rear seats up, the Tucson has 31 cubic feet of cargo space and 61.9 cubic feet with them folded. It’s bigger than average in its class.

The Tucson is equipped with a stop/start mode that shuts down the fuel cell stack and uses battery power when idling to minimizing energy loss. InÂ Regeneration mode, the battery is charged by the electric motor while braking.

While its a compact SUV, the standard rearview camera was helpful pulling out from a narrow driveway and parking parallel in-between two cars.Â The rear parking assist sensor alerts you when reachÂ an obstacle.

According to Hyundai, “Fuel cell technology is simple and there are many similarities among the various automakersâ€™ fuel cell designs. The Hyundai fuel cell has one major difference compared to its competitors: The Hyundai fuel cell uses near ambient air pressure to provide oxygen to the fuel cell stack compared to fuel cell systems that use compressed air. Compressing air requires additional energy. Hyundaiâ€™s design results in low parasitic loss in the oxygen supply, which leads to high fuel efficiency and reduces power consumption by 50 percent. This setup also reduces noise in the cabin.”

Hydrogen is the most abundant element in the universe.Â Hydrogen can be found in light, air and water. One of the most popular combinations with hydrogen is oxygen which makes water.

Like any fuel, hydrogen requires proper handling and a safe system design for production, storage and usage. When properly handled, Hydrogen is as safe as gasoline, diesel or natural gas.Â All Hyundai fuel cell vehicles have been subjected to extensive safety testing including destructive and non-destructive evaluations at the component, system and vehicle level. There are many internal safety mechanisms to ensure the safety of the vehicle. All Hyundai vehicles complete a rigorous crash test program before they are ever driven on public roads. The Tucson Fuel Cell has undergone crash tests for offset-frontal, side and rear impact, as well as fire tests. Also, there are several impact sensors. In event of a crash, the sensors stop the release of hydrogen from the tanks. 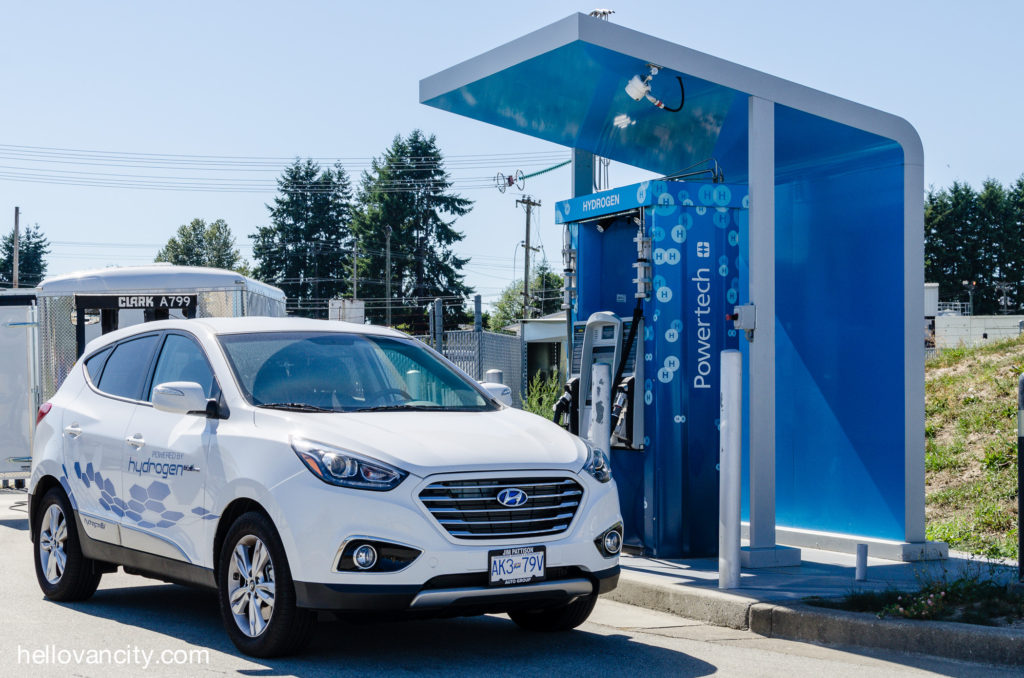 At this time, there’s only one hydrogenÂ fuelling station in Canada. It’s located at Powertech near Guilford Centre in Surrey (12388 88 Ave, Surrey). The station is open from Monday to Friday (closed on weekends) from 8:30 am to 4:30 pm.

Since 2001, Powertech has designed and constructed modular compressed hydrogen fuelling stations. The stations are able to fill both 700 bar and 350 bar fuel cell vehicles in accordance with SAE J2601 fuelling protocols.

The refuelling process is a similar experience to going to traditional gasoline station. You will just need to enter your PIN code to start the process. Each hydrogen fuel vehicleÂ has a unique PIN code. It’s help Powertech monitor vital stats of each vehicleÂ in the fleet.

The station is equipped with the newer, high pressure 700 bar and itsÂ first station in the world capable of fuelling four hydrogen fuel cell vehicles simultaneously.

You fill it up the same way at the gas pump. The Powertech does everything else behind the scene. Powertech pre-cools the pump to -20 C to maximize the gas pressure. The system goes through a 8 step process to ensure there are no leaks.

The Tucson hydrogen tank is very safe.Â If a leak has occur, there is almost no risk of explosion because hydrogen is lighter than air and rises immediately and minimizing the risk of explosion. The Tucson fuel cell is stored in an enclosed space, four onboard hydrogen sensors are designed to detect leaks and sound an alarm.

There’s an infographic explaining how hydrogen fuel cell work.Â An electrochemical process combines oxygen and hydrogen in the fuel cell stack (a powertrain with no moving parts) to generate electricity and water. The electricity supplies power to an electric motor that turns the wheels and the battery stores the power for when itâ€™s needed. The only emission isÂ pure water vapour.