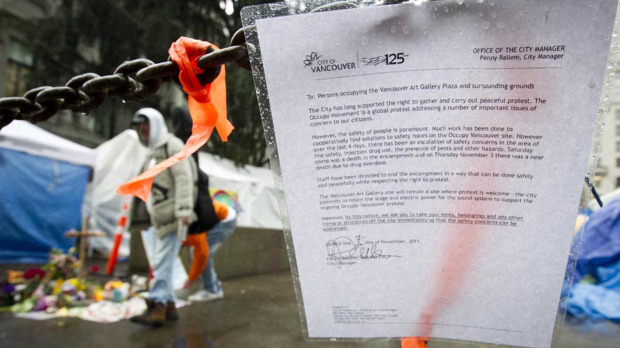 City officials have posted notices at the Occupy Vancouver site asking protesters to “immediately” pack up their tents and belongings and remove them from the Vancouver Art Gallery plaza.

The notices, signed by city manager Penny Ballem, dated Monday, Nov. 7, are attached to gates leading into the protest zone. One is also up at the site’s medical tent.

In asking the occupants to remove their tents and belongings, the city notice cites safety concerns “in the area of fire, injection drug use, presence of pests and other hazards”.

It is the first tangible move by the city to respond to Mayor Gregor Robertson’s declaration that the three-week encampment must end.

At the site Monday morning, however, protesters were defiant. They said they will ignore the city notices.

“People aren’t going to pack up and go,” said Steve Collis, a volunteer in Occupy Vancouver’s media tent and an English Literature professor at Simon Fraser University. “We are going to keep doing what we’re doing. We’re not leaving.”

Added “Tom A.”, a full time airline mechanic who was there filming the interview: “If you remove the tents from Occupy Vancouver, we’re just Vancouver.”

The city notice said the city supports the right to protest at the Art Gallery plaza, but safety concerns have escalated. “The safety of people is paramount.”

The notice pointed to Saturday’s sudden death of 23-year old Ashlie Gough from what is suspected to be a drug overdose, and a near-fatality from a drug overdose last Thursday.

“Staff has been directed to end the encampment in a way that can be done safely and respectfully, while respecting the right to protest,” the notice said.

To that end, the city said it will not be dismantling the protest stage or cutting off power to the site.

Another city notice, dated Friday, Nov. 4, informs occupants that their tents violate Vancouver’s Land Regulation Bylaw, which prohibits erection of any structures or tents on city land without the written consent of the city manager.

Onsite first aid medic Mathew Kogis, who responded to both last Thursday’s drug overdose and Ms. Gough’s difficulty, rejected the city’s contention that the tent city is any more unsafe than anywhere else in Vancouver.

“We are just like the rest of Vancouver, so it’s not surprising that Vancouver’s problems are reflected in this space. So why is the mayor trying to shut us down?” Mr. Kogis observed.

He said he made a morning check of the 80 or so individuals who camped overnight and found no problems.

Mr. Kogis also pointed out the precise cause of Ms. Gough’s death has not yet been determined, and he noticed no drug paraphernalia in her tent, when he and others rushed to try to revive her. “This is not an unclean, unsafe site.”

The city has not said how it will enforce its order to remove the tents, should the protesters refuse.

City officials were also moving to end the tent city in Victoria.

There, protesters have been given a deadline of noon, Monday, to vacate the square by city hall, where they have been since Oct. 15.

If protesters refuse to leave, Victoria city spokeswoman Katie Josephson said options include ticketing individuals who remain on site or seeking a court injunction to order removal of the tents.