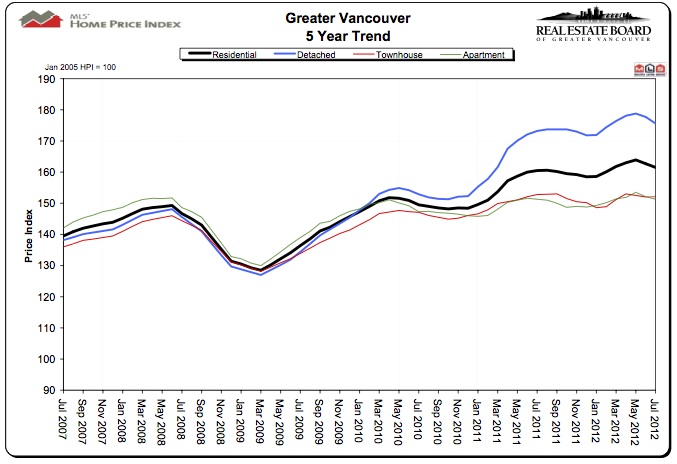 Residential property sales in Greater Vancouver remained at a 10-year low in July, while the number of properties being listed for sale continued to edge down and prices remained relatively stable.

“People appear to be cautious about making significant financial decisions right now. While our local economy appears to be quite robust, there may be some concern about the impact of international markets and the federal governmentâ€™s tightening of mortgage regulations,â€ says Eugen Klein, REBGV president.

New listings for detached, attached and apartment properties in Greater Vancouver totalled 4,802 in July, the lowest number of new listings for any month this year. This represents a 5.8 per cent decline compared to July 2011 when 5,097 properties were newly listed for sale on the Multiple Listing Service® (MLS®) and a 14.5 per cent decline compared to the 5,617 new listings reported in June 2012.

At 18,081, the total number of active residential property listings on the MLS® increased 18.8 per cent from this time last year and decreased 2.2 per cent compared to the previous month.

“With a sales-to-actives-listing ratio of 11.6 per cent, conditions have favoured buyers in our marketplace in recent months,â€ Klein said. “That means buyers have more selection to choose from and more time to make a decision. For sellers, itâ€™s important to price properties competitively. For information on local market prices, contact your REALTOR®.â€

The MLS® Home Price Index (MLS® HPI) composite benchmark price for all residential properties in Greater Vancouver over the last 12 months has increased 0.6% to $616,000 and declined 0.7% compared to last month.

If you have any real estate questions or if you are thinking of buying or selling your home, please contact James Louie Chung, Greater Vancouver REALTOR® â€“ Real Estate Agent at [email protected] or call / text ( 6 0 4 ) 7 1 9 â€“ 6 3 2 8 today!