Fight HST group to suggest how B.C. government can head off recalls 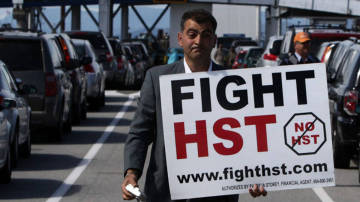 The Fight HST campaign will throw down another gauntlet Monday, as it spells out how the B.C. government can head off an effort to recall MLAs â€“ and which elected representatives it will target if the governing Liberals do not accede to its demands.

In an interview on Sunday, Premier Gordon Campbell said he will stick to his game plan for a referendum: “a clear, clean unequivocal questionâ€ in September of 2011, to be decided by a simple majority of voters.

The populist uprising to scrap the controversial harmonized sales tax has already rung up a string of victories, including a successful petition effort to force a reconsideration of the tax, and the pledge from Mr. Campbell last week that he will abide by a majority vote.

That promise was widely seen to seize the political initiative from the anti-HST forces, forcing petition organizers to argue against a full-blown referendum next year.

The Fight HST campaign is aiming to go back on the offensive. In a Monday morning press conference, former B.C. premier Bill Vander Zalm is to roll out the list of Liberal MLAs who could become targets of a recall campaign as early as this November. Under B.C.â€™s recall legislation, an MLA can be forced out of office, and a by-election triggered, if 40 per cent of voters in a riding sign a recall petition.

The possibility of a recall effort that would pick off Liberal MLAs has been an explicit goal of the Fight HST campaign for months. However, anti-HST organizers say they will outline conditions Monday under which a recall campaign could be shelved. “Weâ€™ll provide some options,â€ said senior organizer Chris Delaney.

He declined to provide details of those options, but his fellow organizer, Bill Tieleman, laid out the conditions that the Liberal government would have to meet to avoid triggering a recall effort:

Hold a referendum this year, well in advance of the September, 2011 scheduled vote;

joint agreement on the wording of any referendum question, rather than simply allowing the cabinet to come up with the question on its own;

the result of any anti-HST victory in the referendum would have to be to extinguish the harmonized sales tax, resurrect the PST and provide some sort of refund to B.C. citizens;

and dispelling confusion over the rules governing the referendum by introducing amendments to the Recall and Initiative Act, or else hold the vote under the Referendum Act.

“It has to be done under a legislative framework that everyone understands, not the Premierâ€™s word,â€ Mr. Tieleman said.

In his comments to The Globe on Sunday, Mr. Campbell rejected all those demands, saying his aim is to have a fair vote on the future of the HST. He declined to say what the referendum wording would be, saying it would need to be discussed with Elections BC.

Mr. Campbell said he does not believe a referendum this year would allow sufficient time for debate, and that the government will stick with the timeline specified in the Recall and Initiative Act rather than rewrite the law on the fly. “This is a serious matter. Itâ€™s not something you decide that you can throw out at the drop of a hat.â€

The act sets a high threshold for success for a vote, a majority of registered voters in the province, and separately, in two-thirds of the provinceâ€™s ridings. Even if successful, the vote is not binding on the government.

However, last week, Mr. Campbell said he would abide by a simple majority of votes cast, a much lower threshold than specified in the legislation. The Premier said he sees no conflict between that promise and his vow to stick to the letter of the recall law, since the requirements of the legislation will still be met. The Premier said he is simply outlining the steps he will take after the vote.

Businesses, including real estate developers, have complained about the uncertainty created by a 52-week delay in deciding the fate of the HST. In response to those concerns, Mr. Campbell said the HST will be in force until at least the end of 2011, whatever the outcome of the vote next September.