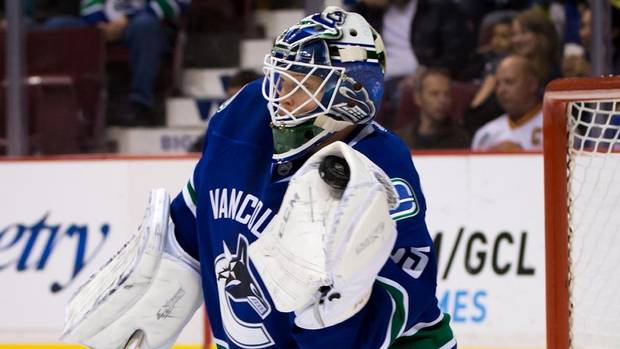 Cory Schneider made 23 saves and Henrik Sedin had a two-point night as the Vancouver Canucks defeated the Edmonton Oilers 4-0 on Thursday.

Schneider, making his ninth consecutive start, had to make just 12 saves through 40 minutes but stopped 11 in the third for his fourth shutout of the season and eighth of his career. His best was when he got a glove on a Taylor Hall shot when the Oilersâ€™ winger was alone in front of the net on a power play with just four minutes to go in the game. About a minute later he rushed out of his net, past the hashmarks, to deny Ales Hemsky a breakaway opportunity.

Nikolai Khabibulin made 24 saves for Edmonton (16-14-7), which had its five-game winning streak snapped and fell into ninth in the conference, outside the playoff picture.

Bieksa opened the scoring just 16 seconds into a five-on-three Vancouver drew when the Oilers took a two-man advantage with five minutes to go in the first. Jason Garrisonâ€™s initial shot hit Jeff Petry in the foot, causing the Oilers defenceman to hobble on the ice as Henrik Sedin set up Bieksa for a one-timer at the top of the circle. His low shot made it past the right pad of Khabibulin, giving him six goals on the year and his first in 14 games.

That was also Bieksaâ€™s 200th career point in his 455th game, all with the Canucks.

Vancouver had just six power plays in their previous four games. The Canucks have now scored three power-play goals in their past 21 games. They finished 1 for 5 in the game, while the Oilers were 0 for 4 with the man advantage.

The Sedin twins combined to give Vancouver a 2-0 lead at 14:26 of the second period. They worked the puck around off a rush and then Daniel Sedin found Henrik Sedin at the side of the net, partially behind the goal-line, and the Canucksâ€™ captain shot it into the open net.

The Oilers failed to must much offence after scoring 25 goals in their past five games. Their best chance to get on the board was when Magnus Paajarvi was robbed by Schneider, set up in front of the net by Jordan Eberleâ€™s centring pass, when the Canucks took a penalty early in the third.

Higgins made it 3-0 at 6:57, taking a saucer pass from Derek Roy on a two-on-one and beating Khabibulin for his 10th of the year. It was Royâ€™s first point as a Canuck in his first game after being acquired in a trade from Dallas on Tuesday.

Kassian converted a rebound with less than four seconds to play, his sixth of the season, to round-out the scoring.