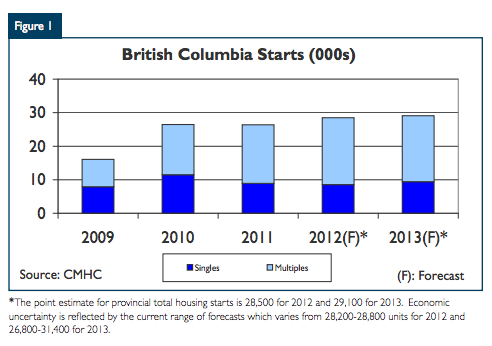 Economic growth is forecast to be slightly stronger in 2013 than in 2012, reflecting increased nonresidential investment and consumer spending partly offset by a weaker global outlook. Domestic factors in British Columbia, including populationÂ growth and continued low mortgage interest rates, remain supportive ofÂ the housing market. Labour marketÂ developments also point to a pickupÂ in housing demand in 2013. In the firstÂ eight months of 2012, job growth inÂ British Columbia was second only toÂ Alberta. Job gains were concentratedÂ in full-time employment, which wasÂ up 3.2 per cent compared to the firstÂ eight months of 2011.

Population growth due to individuals moving to the province from other countries is a key source of housing demand. Net migration is forecast to increase in 2013, consistent with GDP and employment growth that is expected to be above the national average. This will add to housingÂ demand, particularly in Vancouver.

Multiple Starts: The level of multipleÂ housing starts, including apartments,Â semi-detached and row homes isÂ forecast to edge lower in the finalÂ quarter of 2012 and first quarterÂ of 2013, before stabilizing over theÂ remainder of the forecast period. ForÂ 2012 as a whole, multiple starts areÂ forecast to rise to 20,000 units thenÂ fall slightly in 2013 to 19,700 units.

Sales are expected to continue to shift to more modestly priced homes, including apartment condominiums. Provincial resale markets are forecast to move from buyersâ€™ to balancedÂ conditions by mid-2013, although localÂ housing market conditions will vary.

Prices: The average annual existingÂ MLSÂ® home price, is expected to register a decline in 2012 and a slight decline in 2013. This is expected to reflect compositional shifts in sales,Â as condominiums are expected to comprise a larger share of existingÂ home sales over the forecast horizon. In the larger urban centres, the trendÂ of fewer luxury home sales and anÂ increase in sales of more modestlyÂ priced homes is expected to continue.Â As well, the higher-priced VancouverÂ home market is forecast to make upÂ a smaller share of provincial homeÂ sales in 2013. In 2012, average existingÂ home prices are forecast to beÂ $517,400. Prices in 2013 will remainÂ relatively stable at $515,000 as resaleÂ activity picks up.