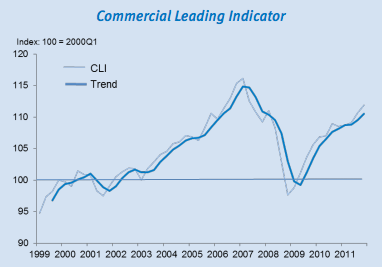 The BCREA Commercial Leading Indicator (CLI) rose for the third consecutive quarter, advancing 1.3 index points, or 1.2 per cent, to a revised index level of 111.9. On a quarterover-quarter basis, the CLI is now 3.2 per cent above its level in the first quarter 2011.

The trend in the CLI has turned sharply upward, reflecting several months of strong underlying data. This signals a potential acceleration of commercial real estate activity in the subsequent two to four quarters.

This quarter’s increase in the CLI was driven by calmer global financial conditions to start 2012 as Euro-based fears cooled. The financial component, accounted for over one-third of CLI’s gain in the first quarter. However, given the re-emergence of fears surrounding the Eurozone, such gains may be only temporary. The CLI was also pushed higher by a significant contribution from manufacturing output and employment

Incoming data from the first quarter of 2012 shows that the BC economy is sustaining, and even building on, the momentum it gained towards the end of 2011. Growth in consumer spending has been buoyed by an improving labour market and residential and non-residential investment continues to be supported by historically low interest rates.

While BC’s economic growth has been steady, uncertainty in the global economy continues to loom over 2012. A Eurozone recession and the significant risk of a Greek exit from the Euro have rattled financial markets. First quarter growth in BC exports to the United States and Japan softened as have sales to Asian markets outside of China. Indeed, China is the only major market in which BC exports grew year-over-year, and even that growth may slow if the Chinese economy falters. On a positive note, economic growth in the United States is very likely to improve on last year’s anemic pace which should help support BC exports.

We are forecasting economic growth of 2.5 per cent in 2012 following an estimated 2.7 per cent in 2011. That rate of growth will likely not be enough to put much downward pressure on the provincial unemployment rate, which we expect will hover around 6.5 to 7 per cent for most of this year. We anticipate a slight acceleration of economic growth in 2013 to 2.8 per cent as an improved employment picture spurs consumer spending and increased confidence in the global economic recovery drives higher levels of business investment and exports.

While economic growth in the province seems to be building momentum through the first quarter, the job market in BC remains relatively lacklustre on the heels of just 0.8 per cent employment growth last year. Indeed the BC economy added just 5,200 jobs in the first three months of 2012. That said, momentum in the job market picked up considerably in April and we expect job growth to continue at a more robust pace for the balance of 2012.

Office employment has also struggled to start the year. Largely flat payrolls in most office sectors and significant declines in professional, scientific and technical services followed a ramp up of employment in those industries to end 2011. Manufacturing employment, on the other hand, rose close to 9 per cent in the first quarter of 2012.

The slow start to the year for output in the manufacturing sector is in-line with a similarly slow pace for BC exports. Total 2012 first quarter exports were just 1.5 per cent higher compared with the first quarter of 2011 due to declines in trade with the United States and Japan. So far this year, China has been the sole driver of BC exports, expanding by 22 per cent while exports to other major Asian markets like Taiwan and South Korea have declined 20 per cent on a year-over-year basis.

BC consumers have opened their wallets a little wider to start 2012, with retail sales expanding by over 5 per cent compared to the first quarter of 2011. That said, there are a few mitigating factors that may constrain future retail spending with the most prominent factor being elevated household debt. While we do not view the debt being carried by BC households as immediately alarming, it does have implications for growth and financial vulnerability that cannot be ignored. Of primary concern, an increasing debt burden magnifies the vulnerability of BC households to economic shocks such as loss of employment and other unexpected financial obstacles.

Further, over the medium term interest rates will normalize and the cost of servicing debt will increase. As a result, consumers may cut back on other expenditures creating a drag on consumption until debt levels comes back in-line with historical norms.

In addition to potentially slower future retail spending, some retail markets, even high profile areas like Vancouver’s Robson Street, are experiencing higher vacancy rates. These increased vacancies can be partly explained by a transition in some retail markets as large traditional Canadian names exit, replaced by foreign retailers looking to take advantage of Vancouver’s strong long-term fundamentals. This transition has created some additional, but likely short-term, vacancies in the retail market.

While investment in the BC commercial market slowed in 2011 compared with an outstanding 2010, transaction volume was still better than average thanks to a strong second half of the year. Investment in BC in 2012 is widely anticipated to flatten out due to fewer buying opportunities and rock-bottom cap rates brought on by high demand and record low borrowing rates.

Long-term interest rates have been highly variable in 2012 as a result of elevated uncertainty in the global economy. This uncertainty, and especially the emerging risk of a messy conclusion to the interminable Euro-crisis saga, makes a significant upward move in long-term rates unlikely.