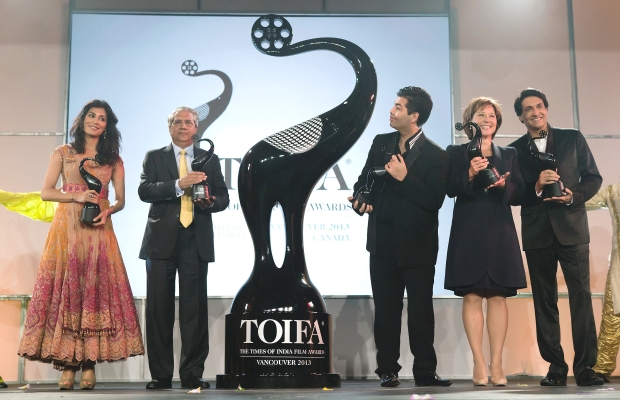 Premier Christy Clark announced today that Vancouver has been chosen as the inaugural host destination of the Times of India Film Awards (TOIFA), with multiple events to be held across the Lower Mainland between April 4 and 6, 2013.

“The Times of India Film Awards will be seen by hundreds of millions of people in one of the world’s fastest-growing economies and Vancouver will be centre stage,” said Premier Clark. “This is one piece of our government’s outreach efforts in India, opening up new opportunities for trade and investment that will create jobs here at home. This is a tremendous economic opportunity for British Columbia to reach new markets – one that we will take advantage of.”

India’s middle class is expected to grow to 583 million in the next 15 years from just 50 million today. This growth will unleash enormous buying potential, much of which will be met by global imports. In the first 11 months of 2012, British Columbia saw its exports to India increase by over 104 per cent compared to the same period in 2011.

“The launch of TOIFA coincides with the Times of India Group’s 175 glorious years of thought leadership in the media and entertainment business. We are now proud to launch TOIFA, a global awards platform conceptualized to bring the film industry closer to fans from across the globe,” said Mr. A.P. Parigi, Board of Directors, Bennett, Coleman & Co. Ltd, The Times of India Group. “With the Awards being held in Vancouver, British Columbia, it is going to be the beginning of a new collaboration with a destination which is home to the second-largest Indian and South Asian population in Canada.”

“The Times of India Film Awards is a catalyst for building awareness of B.C. to Indian businesses, deepening relationships and kick-starting enhanced trade activities,” said Pat Bell, Minister of Jobs, Tourism and Skills Training and Minister Responsible for Labour. “While we’ve already had great success building high-level relationships, we now need to focus on telling Indian businesses and travellers what B.C. has to offer. As the largest media conglomerate in India, the kind of exposure Times Group can offer is unparalleled.”

The Province of British Columbia will provide $9.5 million in matching funding to the Times Group towards producing the event. An additional $1.5 million is being budgeted for various activities in B.C. including hosting the BC-India Global Business Forum, which will be heavily promoted in Times Group’s Economic Times, the second largest financial daily in the world in terms of circulation, after The Wall Street Journal.

The immediate economic benefit of hosting The Times of India Film Awards is estimated to be between $13 million to $18 million of direct spending in B.C. during the event due to tourism and event production.

“India is the fastest-growing nation in the world; it will be the third-largest economy in the world by 2050. The exposure our province will gain in India through this agreement will open the door to significant economic and job opportunities,” said Iain Black, president and CEO of the Vancouver Board of Trade. “India is an obvious business ally for us here in B.C., as we have a common bond through language, the Commonwealth, shared culture, and a firm commitment to democracy and open markets.”

As part of the hosting agreement, British Columbia will receive exposure in India through the various Times Group platforms profiling and highlighting B.C. as an appealing trade market and tourism destination. Besides a live audience of over 30,000, the TOIFA Awards ceremony will be seen by viewers around the world through a global telecast.

“The economic potential and benefits of showcasing British Columbia as a potential travel, trade and investment destination through the Times of India Film Awards is significant, leadership-oriented towards creating jobs and building our economy,” said Anita Huberman, CEO of the Surrey Board of Trade.

“The Times of India Film Awards is an opportunity to showcase British Columbia as a creative industries powerhouse; as a destination for investment and tourism; and as a partner on economic and social priorities that are common to India and the province,” said Yuen Pau Woo, president and CEO of the Asia Pacific Foundation of Canada.

“I am delighted to be at the launch of TOIFA and in this beautiful city of Vancouver,” said film director and producer Karan Johar. “This is an exceptional concept and a great opportunity for us to connect with all our international fans. TOIFA 2013 will also be celebrated as a centenary milestone to showcase Hindi cinema’s legacy in the last 100 years. The Hindi film industry is no longer confined to the borders of the subcontinent and is rapidly expanding its reach.”

“I am very excited to be part of TOIFA’s launch at Vancouver and represent the Hindi film industry,” said actress Chitrangada Singh. “The atmosphere here is amazing; we are really humbled by the love of our fans.”

“It’s great that The Times of India Group has taken such an initiative to merge the boundaries between cinema and people from across the globe,” said choreographer Shiamak Davar. “Not only is it truly rewarding to receive the love and support of our fans, but it also amazes me to see the international recognition and notice that Indian cinema has got today. TOIFA is even more special for me, as Vancouver is my second home so I’m going to have my dancers from India and Canada coming together for this. I am excited to be part of this grand celebration of talent and creativity at TOIFA 2013.”