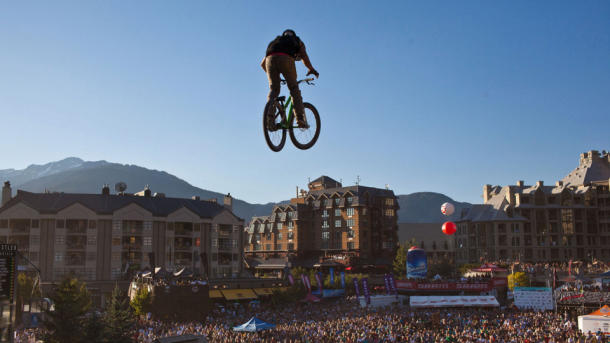 When he first moved to Whistler 11 years ago, Mike Wilson was a seasonal resident who would head home to Mississauga, Ont., come summer because the restaurant he worked for closed its doors when the snow melted.

But today, the Garibaldi Lift Company’s bar manager oversees a year-round establishment thanks to the Whistler Mountain Bike Park and the Crankworx mountain bike festival, which have turned B.C.’s best known winter playground into a bustling summer resort. The nine-day festival, which concluded Sunday, fuels business in skiing’s off-season, but it has also become Whistler’s signature party.

“Every year it grows, it’s almost the event of the year,” Mr. Wilson said while seated on the GLC’s patio Saturday, where there’s not a seat to be had. “This is starting to match Christmas, which is always the biggest week of the year.”

On Friday, one professional snowboarder made the grudging admission that Crankworx is now superior to the Telus World Ski and Snowboard Festival, the 15-year-old winter showcase that caters to Whistler’s traditional customers.

More than 100,000 people visited specifically for Crankworx last year, and the seven-year-old festival issues close to 300 media credentials. A 2005 study concluded that Crankworx had a $10-million impact on the local economy and a new study, due this fall, is expected to show massive growth.

The festival features extreme mountain bike competitions, art and culture events, and a cycling exposition that takes over the village and clogs pedestrian traffic. It has a title beer sponsor, Kokanee, an energy drink sponsor, Monster, and every major cycling company attends the expo, hawking the latest technology.

Proof of its growth came this year when the festival received federal government stimulus money for the first time. Crankworx qualified for $170,000 from Ottawa’s Marquee Tourism Events Program, joining a list of Canadian institutions such as the Grey Cup and Calgary Stampede.

Mr. Wilson said the second Saturday of the festival, when the extreme “slope-style” competition brings out biking enthusiasts and gawkers alike, is his biggest financial day of the year, drawing 1,500 customers to the slope-side restaurant that overlooks the course. It is also Whistler’s busiest hotel night with 90-per-cent occupancy, according to Arlene Schieven, Tourism Whistler’s vice-president of marketing.

Crankworx works because of the world’s most popular bike park, which takes 125,000 riders up its lifts each year – five per cent of Whistler-Blackcomb’s paid lift visits – to speed down challenging terrain complete with bumps, jumps and kickers.

“It would be our single biggest economic driver [in the summer], and I think it’s even eclipsed golf,” said Rob McSkimming, Whistler-Blackcomb’s vice-president of business development. “There’s an impression that mountain biking is a fringy thing, but you look at it, there are more mountain bikers than skiers. … You can’t come here and not be exposed to mountain biking. The bicycle, and the culture surrounding it, is now a big part of our culture.”

Mr. McSkimming said summertime used to be Whistler’s “off-, off-, off-season” and only residents were around. Mountain management envisioned the bike park as a tourist attraction when it took over operations in 1999, but it has become a destination for recreational riders and serious competitors, and Crankworx has become the world’s foremost mountain-biking festival, with rich purses for professionals.

More than 20,000 spectators watched the slope-style competition Saturday, gasping and cheering as rider after rider performed flips and spins more than 20 feet off the ground.

Some held signs declaring, “I wish this were in 3D,” and “I am Crankworx history.” Many lined the trail up-mountain, standing just inches from the competitors for a sports experience that had the intimacy of court-side seats at a National Basketball Association game.

The park is so successful that it has spun off another business, Gravity Logic, co-owned by Dave Kelly, one of Whistler’s early trail builders. Mr. Kelly and his two partners now consult for resorts around the globe, helping them build bike parks on the Whistler model.

Gravity Logic has 20 active projects in 12 countries, including 10 in Sweden and six in Colorado. Mr. Kelly said he works in geographic clusters because once one resort opens a bike park, its competitors feel compelled to respond.