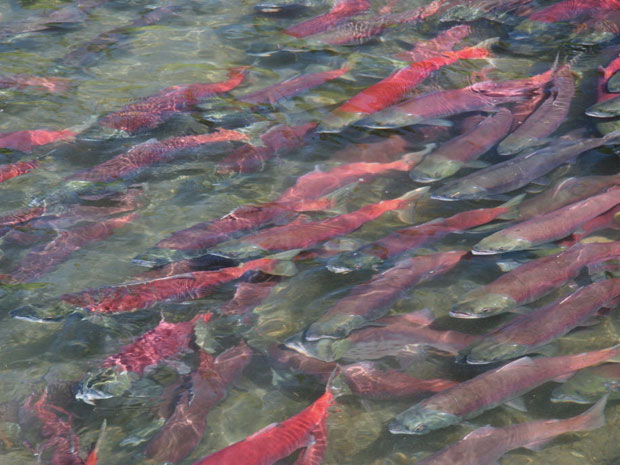 Fishermen are all geared up for the largest Fraser River sockeye run in nearly a century, but many say this will not help the struggling industry recover.

This year is being heralded as a “banner yearâ€ for Vancouver-area sockeye salmon by the Department of Fisheries and Oceans. An estimated 25 million fish are to return, according to the Pacific Salmon Commission.

The high estimates come after one of the worst salmon run disasters in recent memory during which fishermen had to tie up the boats for four years.

“Itâ€™s bittersweet for sure,â€ said fisherman David Secord, speaking on phone from nearby Langley, B.C. “Nothing is going to make up for not fishing all these years. Most of (the fishermen) had to give up our jobs and do something else. You just couldnâ€™t survive on fishing anymore.â€

The sockeye fishery was last open to commercial fleets in 2006 when a total commercial catch of 3.7 million fish was approved.

The high estimates come just before the launch of public forums in B.C. to discuss the collapse of the Fraser River sockeye salmon.

Fishermen at the mouth of the Fraser River are now allowed to fish for a 32-hour period, according to DFOspokesman Barry Rosenberg.

He defended the estimates despite of accusations of mismanagement by several fishermen, who claimed the DFO should be able to better predict salmon return.

“Itâ€™s an estimate, and we said the estimate was seven to 11 million, but the probability of return numbers ranged from four to 30 million,â€ Mr. Rosenberg said, adding that 25 million is within that range.

Another fisherman, Walter Trotic, said he was excited to begin fishing in the Vancouver suburb of Richmond.

But Mr. Trotic, who has been fishing for 40 years, foresees his children taking big financial hits to maintain a fishing boat and licence.

Gary Nakashima, another fisherman, said: “Itâ€™s a real shame. Salmon is the legacy of B.C. and it wonâ€™t last.â€

He said he hopes his children will also maintain a boat, but feels that he will be “the last generation.â€

At the docks, several fishermen expressed concern that packers are not ready for the extra fish.

“Weâ€™ll catch all the fish, but the only thing is, we might run out of storage,â€ Mr. Trotic said. “I donâ€™t think the packers are ready for this much fish to freeze.â€

Scott Moorehead, owner of the family business Longliner Seafoods, said sockeye salmon costs are unlikely to drop with the higher-than-expected catch. Although he is selling a boneless filet fish at $20 per pound, he said the “poor quality of fishâ€ being caught means the prices will not vary.