Guide to Men’s Shirt Collars: Which Styles Go With Which Occasions and Flatter the Face 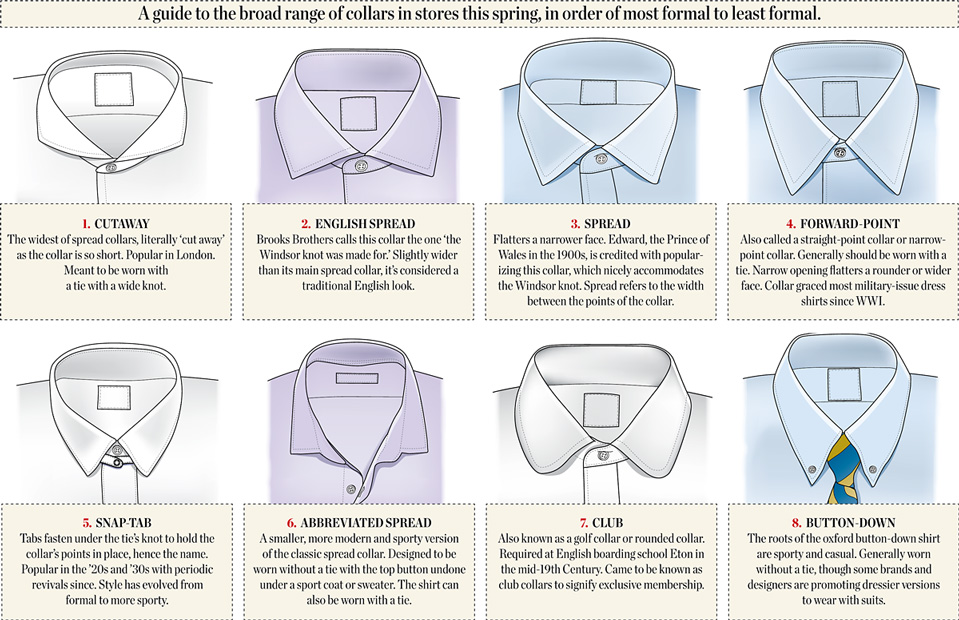 A guide to the broad range of collars in stores this spring, in order of most formal to least formal.

The widest of spread collars, literally â€˜cut awayâ€™ as the collar is so short. Popular in London. Meant to be worn wit a tie with a wide knot.

Brooks Brothers calls this collar the one ‘the Windsor knot was made for’. Slightly wider than its main spread collar, it’s considered a traditional English look.

Flatters a narrower face. Edward, the Prince of Wales in the 1900s, is credited with popularizing this collar, which nicely accommodates the Windsor knot. Spread refers to the width between the points of the collar.

Also called a straight-point collar or narrow-point collar. Generally should be worn with a tie. Narrow opening flatters a rounder or wider face. Collar graced most military-issue dress shirts since WWI.

Tabs fasten under the tie’s knot to hold the collar’s point in place, hence the name. Popular in the ’20s and ’30s with periodic revivals since. Style has evolved from formal to more sporty.

A smaller, more modern and sporty version of the class spread collar. Designed to be worn without a tie with the top button undone under a sport coat or sweater. The shirt can also be worn with a tie.

Also know as a golf collar or rounded collar. Required at English boarding school Eton in the mid-19th Century. Came to be known as club collars to signify exclusive membership.

The roots of the oxford button-down shirt are sporty and casual. Generally worn without a tie, though some brands and designers are promoting dressier versions to wear with suits.