Sir Paul McCartney’s On The Run Tour coming to Vancouver’s BC Place on November 25, 2012 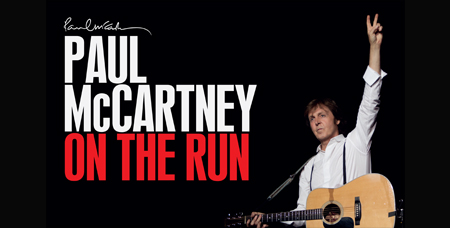 Sir Paul McCartney will coming to Vancouver’s BC Place Stadium on Sunday, November 25, 2012.

Having kicked off over a year ago with the legendary July 15-16, 2011 doubleheader at New York City’s Yankee Stadium that had 90,000 fans singing along non-stop over the course of two near three-hour performances, and more recently gifted Mexico with a historic free May 10 show drawing 250,000 to Mexico City’s central plaza, The Zocalo, Paul McCartney’s record-breaking On The Run Tour will round out 2012 by returning to Canada for two shows: November 25 at BC Place in Vancouver BC, and November 28 at Rexall Place in Edmonton AB.

November 25 will end Paul’s near 50-year absence from Vancouver, the BC Place show being his first in the city since The Beatles played Empire Stadium in 1964, while November 28 at Rexall Place will be the first Paul McCartney concert ever in Edmonton, yet another On The Run date bringing Paul McCartney to a new locale for the very first time—the latest on a list already including Abu Dhabi, Colombia, Paraguay, Uruguay and more.

Paul McCartney’s On The Run Tour has played over 30 dates spanning North and South America, the UK and Europe and the United Arab Emirates. The November 2012 dates are Paul’s first in Canada and the U.S. since the summer 2011 run that generated some of the most enthusiastic responses of Paul’s peerless career from audiences and critics alike