Thousands of Vancouver Zombie Walk pariticipants gather at the Vancouver Art Gallery to stumble down Robson Street. Zombie Walks organized public gatherings with people dressed as zombies have taken place across North America as early as 2001 in Sacramento, California. The Sacramento event was originally intended to promote a local midnight movie festival. It didn’t take long before a slew of cities across the continent began their own walks and adopted them as annual affairs. Vancouver’s first undead jaunt took place Aug. 27, 2005 and had over 400 participants. 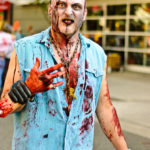