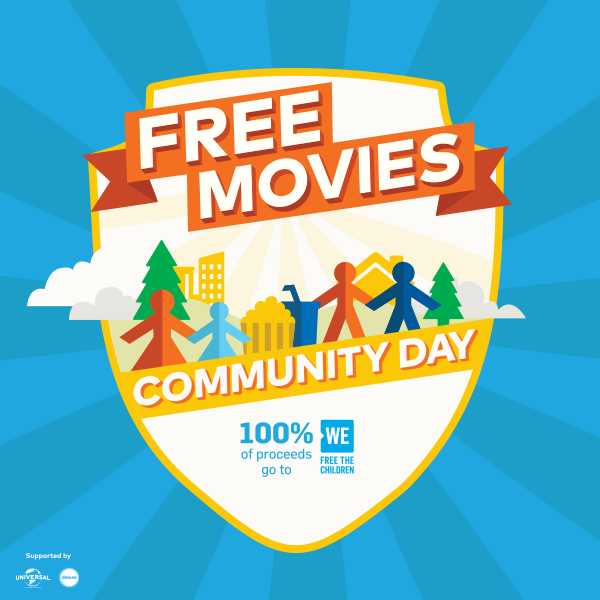 Cineplex Entertainment (“Cineplex”) announced that on Saturday, October 24 families and movie-lovers across British Columbia can join in a morning of free movies at their local Cineplex theatre – all for a good cause. Now in its fifth year, Cineplex’s ‘Community Day’ treats guests to a selection of great family-friendly movies with all proceeds from donations and concession sales supporting Free The Children, its national charity partner.

“Last year the 125,000 Canadians that came to our theatres on Community Day helped us to raise over $530,000 in one morning and I hope that this year we’ll raise even more,” said Ellis Jacob, President and Chief Executive Officer of Cineplex Entertainment. “We know that great movies can inspire change so we invite Canadians to join us in supporting Free The Children to empower youth across our country and around the globe.”

This year’s Community Day film line-up includes Despicable Me 2, Fast & Furious 6, Dr. Seuss’ The Lorax, Pitch Perfect, Hop and Dumb and Dumber To. Movie-lovers in attendance can enjoy a morning of free movies and select concessions like coffee, popcorn, soft drinks and select candy items will be priced at $2.00 each. Cineplex will also be selling exclusive mini-Rafiki friendship bracelets for $2.00 each, with all proceeds from donations and concession sales supporting Free The Children, its national charity partner.

“Community Day is a wonderful way for families across Canada to spark conversations about getting involved in making positive change in their communities,” said Marc Kielburger, co-founder of Free The Children. “We are proud to partner with Cineplex on initiatives that bring families together, and empower young Canadians by giving them the tools to create transformative change and fuel their passion for making a difference.”

On the morning of October 24, all 22 theatres across British Columbia will open their doors to guests, but seating is limited and available on a first-come, first-serve basis only. Movies will begin at 9:00 AM, with all locations returning to regular programming in the afternoon. Films are being shown in French and English depending upon the market, so guests are encouraged to visit Cineplex.com/CommunityDay for a list of participating theatres, showtimes and available languages.

Cineplex Entertainment has raised over $1,700,000 for Canadian charities since hosting its first Community Day five years ago. The company thanks its corporate employees and theatre cast members who volunteer their time as well as Universal Pictures, Mars Canada, Wrigley Canada and Deluxe for providing movies, product or services to make Community Day a reality.