The Museum of Anthropology (MOA) at UBC presents an insiderâ€™s perspective to the diverse cultures of the Pacific Islands with its animated new exhibition Paradise Lost? Contemporary Works from the Pacific on display from July 24 to September 29, 2013. Curated by Dr. Carol Mayer (MOA Curator, Africa/Pacific), and organized to coincide with the Pacific Arts Association Symposium at MOA, the exhibition will feature the works of 13 artists displayed throughout MOAâ€™s public spaces and at its downtown Satellite Gallery.

â€œThrough idyllic tourist misrepresentations, Hollywood, and the ever-increasing popularity of tiki kitsch, the Pacific Islands occupy a place in the Western imagination as a paradise filled with white sandy beaches and lush, tropical landscapes inhabited by dusky maidens,â€ says Dr. Mayer. â€œIn Paradise Lost?, we aim to challenge these one dimensional assumptions, presenting contemporary artists from the Pacific Islands who play with and invert such perceptions. Their work provides an alternate, more complex vision of the region.â€

For Paradise Lost? Contemporary Works from the Pacific, Mayer has gathered an esteemed group of 13 contemporary artists from New Zealand, Papua New Guinea, Samoa, and Vanuatu. Working in video, installation, sculpture, weaving, painting, and photography, these artists show the Pacific Islands from an insiderâ€™s perspective. Their artworks explore environmental concerns, cultural heritage issues, questions relating to the experience of migration and diaspora, and the intersection of Indigenous belief systems and Western religions.

Weâ€™re giving away a pair of tickets toÂ Museum of Anthropology Paradise Lost? Contemporary Works from the Pacific from July 24 to September 29, 2013.

Hereâ€™s how you can enter to win: 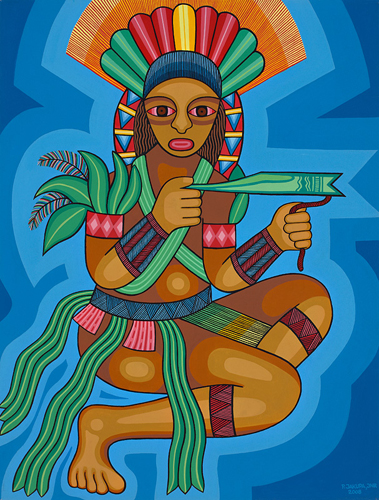