Contest! Monster Jam on February 28, 2015 at BC Place Stadium 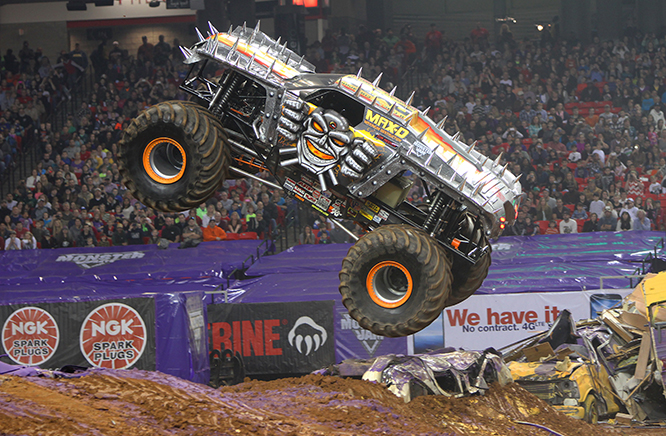 For one action-packed show only, Vancouver motor sports fans are getting revved up to experience the worldâ€™s best monster trucks battle it out in the ultimate event of intense speed, racing and destruction when the Maple Leaf Monster JamÂ® Tour returns to BC Place!

The Maple Leaf Monster Jam Tour is highlighted by the highly anticipated head-to-head battle of the night pitting the Monster Jam powerhouse Grave DiggerÂ® against the Canuck themed monster truck Northern NightmareSM, driven by World Freestyle Champion and Kelowna-resident Cam McQueen. Other fan-favourite trucks include Bounty HunterÂ®, Grave Digger The LegendÂ®, plus the return of Scarlet BanditTM (after a 12-year hiatus from Vancouver).

In addition to world-class racing and freestyle competition, die-hard fans can come to the stadium early to enjoy the Party in the Pits pre-show experience â€“ which gives fans unparalleled access to view their favorite trucks up close and the opportunity to meet the star drivers for autographs and photos!

One of the most popular touring family entertainment sporting events in the world reaching more than 135 cities around the globe and over 350 performances per year, Monster Jam is a high-flying, car-crushing explosive event of demolition, speed, power and unbelievable stunts with the worldâ€™s best monster trucks and drivers whose skills provide an awesome spectacle of â€œrock-and-roarâ€ that will bring fans to their feet cheering for more!

Created for the true die-hard Monster Jam fans, we have taken the Total Access Pass to the next level by offering fans the ultimate live event experience packed with new exclusive offers! Each Total Access Pass includes:
– Best Seats in the House in the Club Level section
– Early Access to the Pit Party prior to the general public at 2:00PM; Pit Pass admission fee included free for TAP holders

Tickets are on sale now! Tickets & Pit Passes are available for purchase at the BC Place Box Office, online at Ticketmaster.ca, all Ticketmaster retail outlets or charge by phone at 855-985-5000.

We have partnered up with Monster Jam to give away a family pack (4 tickets) to one lucky reader.