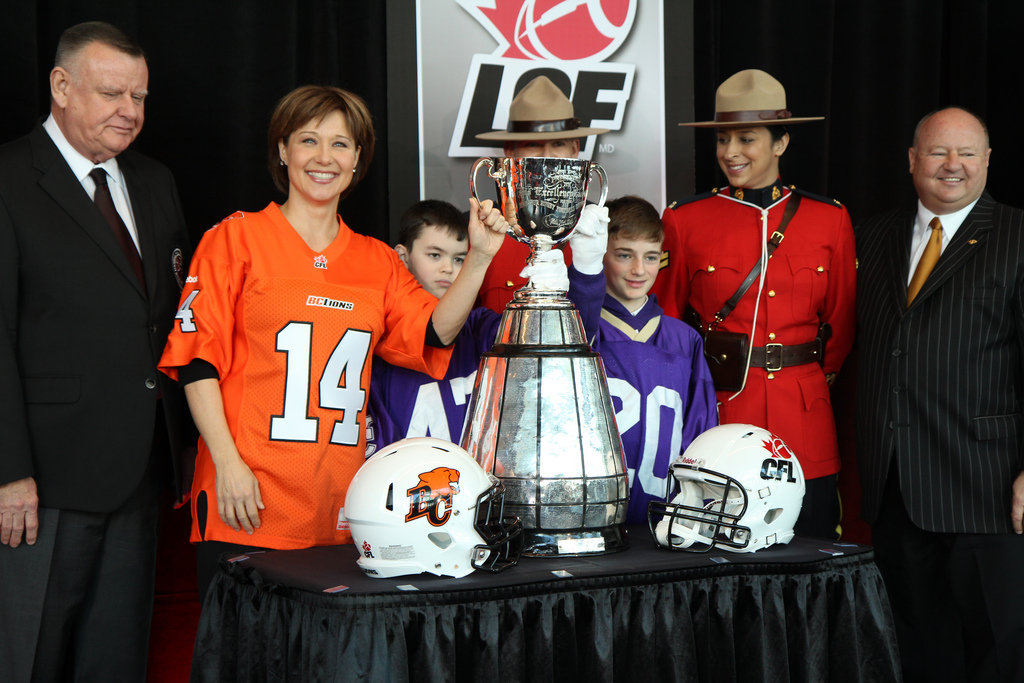 The Canadian Football League will cap what promises to be a banner year by staging the 2014 Grey Cup game and festival here in Vancouver, it was announced today.

â€œWeâ€™re thrilled and proud to award the 102nd Grey Cup to the city of Vancouver and the people of British Columbia,â€ said Commissioner Mark Cohon.

â€œNext year is shaping up as a real milestone for our league, with the return of Ottawa to the CFL, and the opening of a new stadium in Hamilton, on the heels of the momentum we plan to generate this year.

â€œAnd BC Place, one of our brightest and greatest stages, is an ideal place to cap a tremendous year.â€

At a media conference here today, the leagueâ€™s Chief Operating Officer announced the game will be played on Sunday, November 30th, and cited Vancouverâ€™s excellent track record as a Grey Cup site.

â€œWe know BC Place, one of the great venues in North America, will be packed: our last Grey Cup here sold out in July,â€ Michael Copeland said.

â€œAnd we know the economic impact will be huge: it was measured at $118 million in 2011, as 130,000 visitors poured into Vancouver. Most of all, we know the people here will be wonderful hosts.â€

The province of British Columbia has pledged its support for the event.

â€œThe Grey Cup isnâ€™t just a game, but a week-long festival of Canadian football and culture. Itâ€™s an event that leaves its mark on the host city and all those Canadians who travel to be part of it. I know Vancouver will again play host to a tremendous Grey Cup.â€

The BC Lions are thrilled to be bringing the Grey Cup back to Vancouver.

“The Lions are British Columbia’s team and our success is a reflection of our loyal fans and the people of this great province,” said owner Senator David Braley. “They are the reason past Grey Cup festivals held in Vancouver were among the very best in our leagueâ€™s history and they will make the 2014 Grey Cup game and festival another huge success.â€

â€œWe are thrilled to have our bid selected by the Canadian Football League and we are extremely grateful to Premier Christy Clark, her colleagues, Dana Hayden from PAVCO, Russ Cowan of the Vancouver Hotel Destination Association and Rick Antonson of Tourism Vancouver for their support in securing the 2014 Grey Cup,â€ said Lions president and CEO Dennis Skulsky. â€œIt takes a team effort to host world-class events like the Grey Cup and Iâ€™m confident that we will raise the bar once again next year. I know fans of the BC Lions will embrace this opportunity to celebrate our nationâ€™s biggest sports event.â€

Staging a Grey Cup is truly a team effort that includes the entire community, including a strong team of volunteers.

â€œWeâ€™re very excited to welcome the Grey Cup back to Vancouver next year,â€ said Tourism Vancouver president & CEO, Rick Antonson. â€œOur sports culture is so vibrant and engaging. We have literally hundreds of motivated and skilled volunteers to ensure Grey Cup will once again be an enormous success for Vancouver, building on our reputation as one of the worldâ€™s premier sports cities.â€

â€œOur member hotels are pleased to be a major supporter of an event, that has significant positive impact, on downtown tourism businesses throughout Grey Cup week in November,â€ Russ Cowan, Executive Director, Vancouver Hotel Destination Association.

â€œThe CFL will work with people here to make sure the 2014 Grey Cup will be one of the biggest and best ever,â€ Copeland said.

â€œAnd it will do what the Grey Cup does better than anything else: bring Canadians together, in fun and friendship, and with enormous pride.â€

The 101st Grey Cup will be played this November 24th in Regina, Saskatchewan.