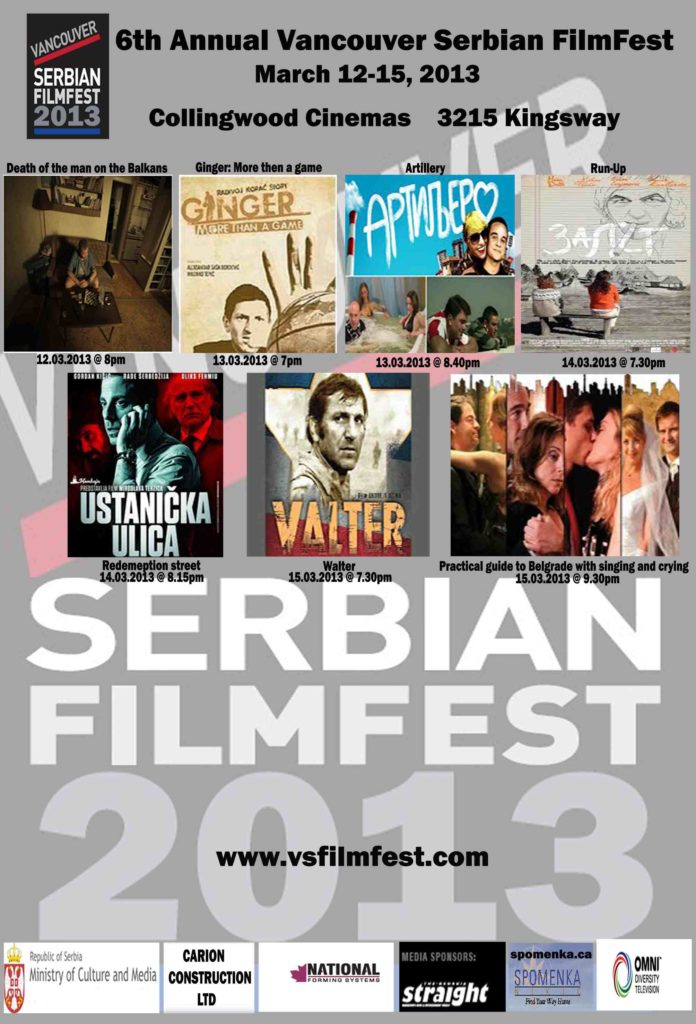 Each year, the festival brings the best in current Serbian cinema over the course of four nights, with attendance by guest actors and filmmakers.

This year’s highlights include:

Opening film Death of the Man on the Balkans (Drama, 2012, Best Film at Panorama of European Cinema Festival)
A lonely composer commits suicide in his apartment. The gunshot alarms the tenants in the adjacent flats. Neighbour Aca is the first to arrive on the scene and, as the first witness, he decides to wait for the police. But the “protectors of public order” are stuck in traffic. So the neighbours pass the time as best they can, and eventually a wide variety of characters involved in the “case” make their way into the apartment.
Showing March 12 at 8:00 pm, followed by Q&A with actress Natasa Ninkovic

Ginger: More Than a Game (Docu-Drama, 2011, Best Film at Abuja International Film Festival & Best Foreign Feature Film at Palermo International Sport Film Festival)
At the time, Radivoj Korac was the best basketball player in the world and a member of FIBA Hall of Fame in Madrid, top scorer of the 1960 Rome Olympic Games, Olympic Silver medalist in Mexico 1968, two time Silver medalist in the World Championships, and the man after whom one European club competition was named. Even his tragic, James Dean-like end in a car crash on the outskirts of Sarajevo became a powerful metaphor. His life made him a star. His death made him a legend.
Showing March 13 at 7:00pm

Two parallel stories; one is a portrait of legendary Yugoslav war hero Vladimir Peric Valter, mostly known as a leader of the underground resistance that was killed on the day of Sarajevo’s liberation, April 6, 1945, and a portrait of Velimir Bata Zivojinovic, legendary Serbian actor who made 330 films in a 55 year-long career. The most popular role he ever played was of Valter in Valter Defends Sarajevo in 1972. The movie was probably seen by more people than any other movie in history, thanks to its extreme popularity in China.
Showing March 15 at 7:30pm, followed by Q&A with Director Andrej Acin