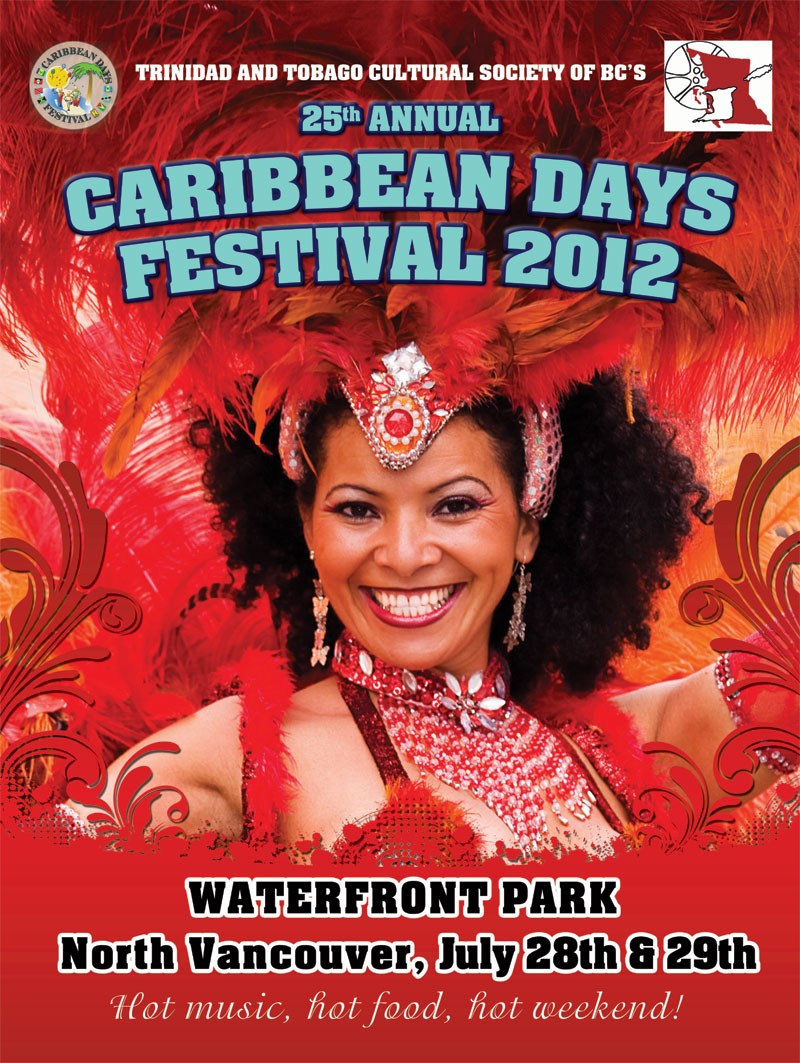 Each July, the Trinidad & Tobago Cultural Society of BC presents the Caribbean Days Festival. This event draws a crowd of exuberant fun-lovers to North Vancouver’s Waterfront Park for a weekend of parading, dining and dancing in the sunshine.

This is a weekend of tropical rhythm, cuisine, carnival and culture as only the Caribbean can offer. Over the years, the Festival has grown into the largest Caribbean event on the local calendar, Drawing tens of thousands of attendees, it is among the very largest cultural events in BC, Canada.

Each year, the streets come alive with the sights and sounds of Carnival during our Multicultural Street Parade! Enjoy the spectacle of a multitude of costumed revellers cavorting down the streets of North Vancouver. The Parade is truly a magnificent way to appreciate Caribbean culture and style.

Kids get to join in too! Our Children’s Carnival Parade is held the next day.

Date: Saturday, July 28, 2012
Time: 10:00 AM. Parade usually runs 1.5 hours.
Location: The Parade begins at Lonsdale and 12th then heads down Lonsdale to Esplanade, then turns West to arrive at Waterfront Park and terminate at Forbes & Esplanade.

Caribbean Days Festival features an amazing outdoor music festival. Each year, our main sound stage plays host to a lineup of bands playing Soca, Reggae, Calypso, Latin, African and other international sounds to a large crowd. Singers, dancers and other performers entertain with sights and sounds from a wide range of cultures.

Festival-goers are welcome to bring their blankets and find a spot on the grounds from which to take in the show. Prepare to “get something and wave” when the fever of the island music takes over. Caribbean music gets people moving, young and old… there’s nothing like it!

Remember that Rikki Jai is performing one night only, at the Waterfront Party. He is not engaged to play at Caribbean Days, so if you want to see him, be at the Party! The new location is larger than before but this event can still sell out, so get your tickets in advance.

The Festival grounds are split into two parts. The North side of Waterfront Park has a food concession area and a large beverage garden. Enjoy spicy Caribbean food as well as other international fare, then relax with an ice-cold drink in the hot sun.

On the South side, there is an outdoor music festival. Dancers and other performers entertain while bands play Reggae, Calypso, Latin and other international sounds to a large crowd. There is a Family Zone with face painting, a children’s playground and other activities.