Since the introduction of the 1997 Toyota Prius, world’s first mass produced hybrid vehicle, Toyota continues to evolve the Prius line. I was invited to the 2016Â Toyota PriusÂ media preview at the Rosewood Hotel Georgia. Vancouver was one of the first city to embrace the Prius and hybridÂ cars.

Stephen Beatty, Vice President and Corporate Secretary of Toyota Canada Inc, walk us through the evolution of the Toyota Prius.Â Toyota wanted a progressive name so they chose Prius, which means “to go before” in Latin. It serve as a platform to build a low emission cars.Â It took over 5 years toÂ develop the Toyota Hybrid Synergy Drive System pairing a 30 kilowatt electric motor with a small 1.5 litre, 4 cylinder engine.Â Today, over 8 million Prius has been sold in more than 40 countries. The Prius is the best selling hybrid vehicle in Canada.

However, its not just aboutÂ fuel efficiency anymore. Customers wants the benefits of a hybrid but don’t want to compromise on the looks and performance. Toyota have reengineered & redesigned the 4th generation Prius from the ground up so its more fun to drive and stylish.

From the side, it is longer and sleek conveys a feeling of forward motion, inspired by a runner in the starting blocks.Â The overall bodyÂ has lowered and the distinctive roof peak has been moved forward.Â The new standard LED headlights minimizes the Prius front fascia. It is available in 6 colours and the new “Hypersonic Red”.

Inside the Prius, youÂ will immediately fell comfortable and impressed with the premium details.Â TheÂ new wrap around dash designÂ featuredÂ a SofTex leather wrapped steering wheel, a 7 inch LCD audio system with navigation, SiriusXM satellite radio and wireless charging. In addition, the cabin has ample legroom and spacious headroom. 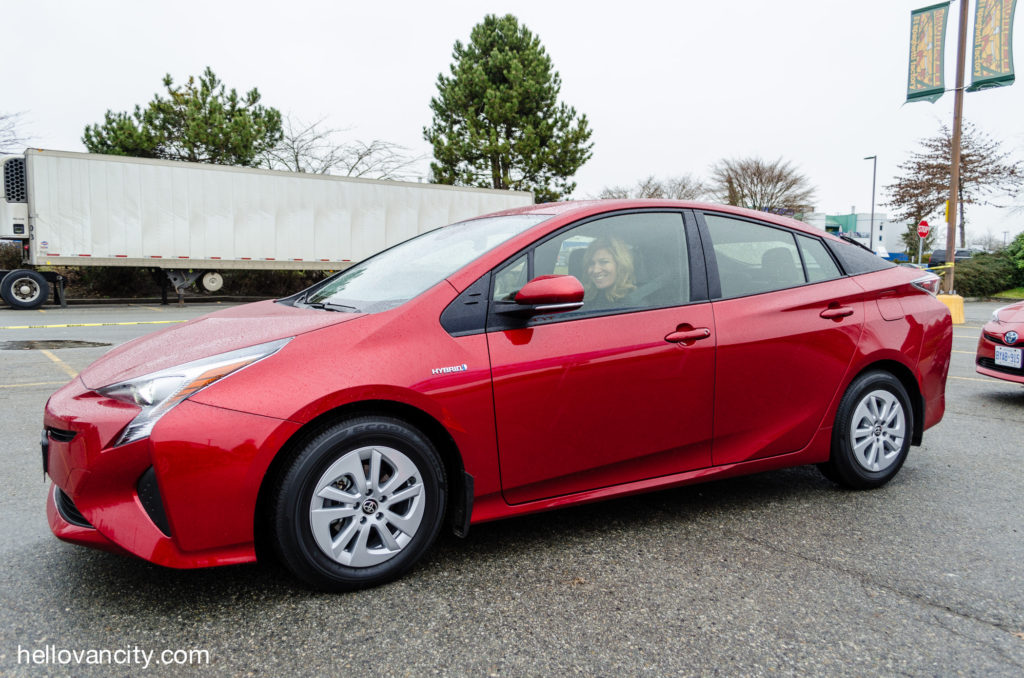 The 2016 Prius is the first global vehicle to be built using TNGA, the Toyota New Global Architecture.Â TNGA will help ToyotaÂ build cars using standardized platforms, powertrains and major components. Currently, ToyotaÂ uses more than 100 platforms and 800 powertrains.Â With TNGA, just five layouts will be needed for the whole range from compact cars to SUVs.

After the presentation, we partnered up and drove the Prius around scenic Stanley Park. With aÂ 1.8 litre,Â 4 cylinder, Hybrid Synergy DriveÂ and an electric motor produceÂ 121 horsepower, the Prius getsÂ 4.4 L/100km in the city and 4.6 L/100km on the highway. It is the most fuel efficient non-rechargeable hybrid vehicle in Canada.Â Behind the wheel, the Prius feels very comfortable andÂ fun to drive.

We then drove to Richmond to test out the Intelligent Parking Assist System.Â Once the system find an empty parking space, the car can steer itself.Â The self parking systemÂ work flawlessly. It can automatically do back-in & parallel parking.